Can someone at Intel please stop the rot?

Today Intel published one of the most intentionally misleading ‘blogs’ in recent memory. This form of deceptive ‘benchmarking’ and spurious claims has gotten so pervasive that SemiAccurate can no longer suggest it is not intentional.

The ‘blog’ in question is one of the newest ways Intel is trying to put out a message around the press. The company has all but destroyed the credibility of their messaging of late and rather than fix the problem, they are trying to work around it. Rather than being honest or explaining their dubious and at times outright misleading claims, they are attempting to go directly to the public who might not be aware of how things are being skewed.

The ‘blog’ in question titled, “HPC Leadership Where it Matters – Real-World Performance“, can be found here. On the surface it looks innocuous enough but it is unquestionably carefully crafted to mislead. Starting out with the technical, take a look at this excellent article by Patrick Kennedy on the subject at Serve The Home. That is pretty damning but it gets far worse.

Sticking with the subject of this specific blog for now, lets point out a few other bits that were omitted by Intel. First of all the title uses the term “Real-World Performance” which is an Intel dog whistle for gamed benchmarks using software you can actually buy. A good example of this is the GROMACS version that Intel chose. Real world? Sure. Actual code that people use? Yup. Carefully chosen version that included all the Intel optimization but is known broken on the AMD Epyc chip being compared to? Unquestionably.

Then there is the compiler used, Intel’s own ICC, which is a very good compiler on Intel products. Unfortunately it has a long history of intentionally de-optimizing code for AMD CPUs, something that was so bad it forced Intel to submit to an FTC decree mandating it be disclosed in marketing materials.

Which brings us to the next point, Intel is technically complying with that disclosure agreement but in name only. Recently the company started to not include the disclaimers and legally mandated disclosures on the materials in question. Instead they put it in a link which may or may not still be there when you read that article in the future. Worse yet it isn’t directly linked, it just sends you to a page that is extremely hard to navigate upon which the legally mandated disclosure is buried several clicks and about five pages of scrolling down. It took the author about five minutes to find the disclosure. 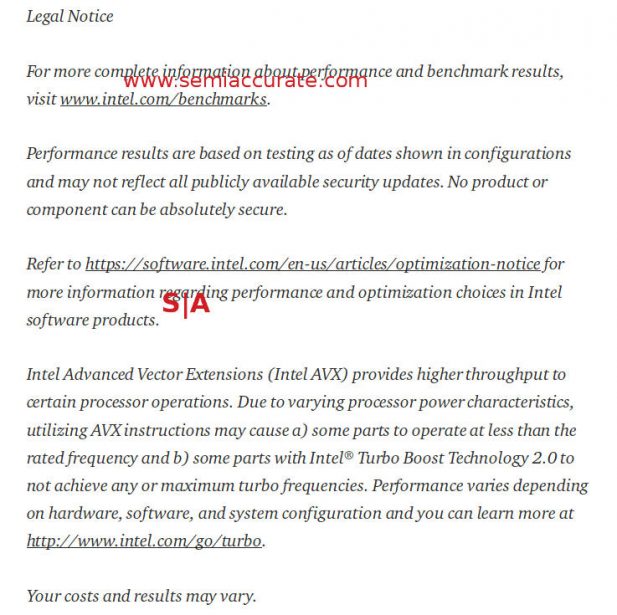 Links rather than disclosure

There is no question that this is intentional and meant to negate the point of the disclosure. There is no defense for it, it costs Intel no more to add a few lines of a footnote to the blog in question but they don’t. This skirts the intent of the FTC order because that order would make Intel’s claims looks even worse than they do now.

By that we mean the obvious GROMACS version, old Linux kernels, deoptimizing compilers, crippling the AMD boxes with lowered thread counts, and more. They also used an older board that doesn’t support PCIe4 which would give AMD an advantage in any “real-world” scenario, you would have to understand the systems mentioned in details to understand how crippled this system was. Would you trust any company that did that if you knew they were doing this kind of ‘deoptimizations’? There is a fix however, hide the evidence by burying it on another page behind a link.

Then there is pricing or lack thereof. When Intel released their Cascade Lake line of CPUs they included pricing for every bit of it bar the 9200 dual die parts. To date they refuse to disclose pricing for this product line but will give a series of farcical excuses about why they won’t give it out. For this article we will assume it is about 2x the price of the Xeon 8280 or $20,018, call it $20K for brevity. These systems compare 2x $20K processors to 2x $6950 AMD Epyc 7742 processors, call it $7000 for brevity or about 1/3 the price of the Intel CPUs. That means the AMD box is unquestionably cheaper, likely less than half the price of the Intel system when fully equipped, it is hard to equip a system with enough goodies to make up for a $26,000 difference in CPUs.

That 2-3x TCO advantage is narrowed by the fact that Intel claims a 31% performance advantage. As we covered above, the benchmarks are unquestionably gamed to disadvantage the AMD systems and the hardware seems chosen for the same reasons. If the hardware and software were fairly chosen, the Intel 9200s would likely still win but the margins would be vanishingly small.

Then we come to TCO, the major components of which are purchase price and running costs. Purchase price is a blowout win for AMD, period. Running costs are mainly dependent on electric pricing, Intel has a 400W CPU versus AMD’s 225W. We will also point out that AMD has a 280W 7H12 CPU which would be much more comparable to the 9200 but for some reason that wasn’t mentioned or tested.

Excuses like that 7H12 being a somewhat restricted part due to the water cooling recommended for it elicit laughs when compared to the almost non-existent 9200 line. The Xeon 9282 in this blog requires water cooling, the AMD 7H12 potentially does not. That said the Xeon 9200 has one potential board and chassis, both made by Intel, with a severely crippled feature set an again no disclosed pricing. With power and cooling taken into account, that resounding TCO win multiple for AMD gets even larger, something Intel conveniently does not mention in their writeup.

But this ‘blog’ is about performance, not cost, right? “In general, higher node performance drives lower TCO as fewer nodes are required for a fixed performance level. With the added performance of the Xeon Platinum 9200, fewer nodes are required, driving lower node acquisition cost, lower fabric, switching, and cabling cost. Xeon Platinum 9200 series, with a higher TDP (250W to 400W) than AMD’s Rome 7742 processor (225W), does consume more power and therefore has a higher power cost, but it is more than offset by the lower number of nodes required.”

Anyone think that a sane setup requires $26K in cabling per node? Even Monster pricing isn’t that abusive. High end switches can be expensive too but again not in the same number of digits as the CPU cost delta. Then again Intel is claiming an ~1.31x performance advantage using intentionally gamed benchmarks so you would in theory only need 31% more of those precious cables and switches, not a deal breaker even if it was true.

Once again you could argue that the PCIe4 slots in an AMD Rome system allow for 200GbE links which would markedly improve performance in most of the listed benchmarks in a cluster, Intel can’t do that at any price. Fair? You be the judge. Intentional? Ditto.

While this blog is egregious it could possibly be written off as a fluke, misunderstanding, or just a few errors. While those excuses will probably be tried internally and externally, this type of misbehavior is now endemic at Intel. I will give you a few of the more recent examples starting out with the recent Ice Lake consumer mobile launch. In it Intel failed to disclose the model of the CPU they compared to an AMD part, failed to mention the TDP of the parts tested, and in general said, “trust us”. This is a direct regression from past behavior and a blatant violation of industry norms. When asked about it, one Intel employee responded that they didn’t know what the model number was a the time of testing, another said they didn’t want to give away that information too early. This was from the product launch deck mind you.

Another blatant example was the recent Comet Lake launch where Intel showed the new 6-core chip had a 16% performance advantage over the 4-core predecessor. That may sound a little underwhelming, one would expect closer to a 50% increase in performance with a 50% increase in cores, right? The real problem was Intel used a 25W part for the 6-core tests and a 15W part for the 4-core tests. They buried this fact in the fine print pages later. No we are not joking. This is flat out intentionally deceptive, no excuses, it is just wrong.

Then we come to one of the worst of the bunch, the Intel 5G modem debacle. SemiAccurate has been claiming for years that Intel never had 5G silicon, working or not. Intel of course denied this but never actually showed silicon. For their first 5G modem ‘launch’ they showed a badly photoshopped fake chip to ‘prove’ it was real. We mocked them.

When the next generation ‘came out’ it was unlikely Intel had silicon then either but they claimed it was real. To ‘prove’ it the company faked another chip but in an astoundingly stupid move they faked the same photo claiming it to be two different parts! You can tell by the fingerprints, it is the same fingers slightly blurred in one of the shots but the same one. And yes they tried to defend that action and claim it was real. Again we laughed at them.

In addition to today’s ‘blog’ those are three more examples of Intel’s malfeasance in messaging of late. Things have gotten so bad and are so prevalent there is no way it is unsanctioned from the top. At this point SemiAccurate is calling on Intel management to force a change in this behavior and fire those responsible for this, not necessarily the people lower down on the chain of command who can be easily blamed but those higher up who set the culture and allow this to happen.

Things have long progressed past the point where it is hurting Intel’s image and standing as a company. An ethical company would simply not allow this to happen but Intel is. It is never too late to affect change and start cleaning up the rot if the corporate will is there, is it at Intel?S|A