AMD hits the trifecta today, not three new chips launched but three botched launches in a row. SemiAccurate is getting tired of this footgun approach but there isn’t much we can do.

Yes they managed to snatch defeat from the jaws of victory once again by destroying the momentum behind Threadripper 3 with a ‘launch’ that makes sure no one will care when it is released. AMD put out just enough to make sure people knew what was coming but too much to make sure they are actually interested when it is released. In short they destroyed the momentum for quite frankly ill-considered PR reasons. In the grand scheme of things this one ranks in the middle between the pointless Epyc/Rome launch and the Ryzen 3000 before it. 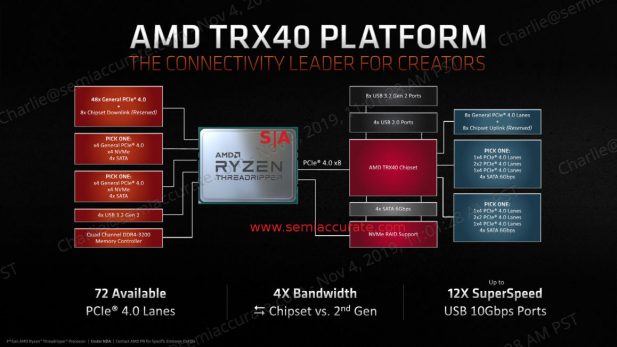 As much useful as we got

The interesting bits like the chipset, connectivity, and what the meaning of things like the uplink and downlink lanes are were not in the briefing although they were on the slides. We asked 13 questions to start off with, the most pointless six were answered after we went to sleep last night, the ones that matter weren’t. The plan is to hold that info for the ‘launch’ by which time no one will care, we already don’t. Own goal guys, again, can you please stop with the stupid from here on out? You can’t buy TR3 now, you will have to wait until November 25 for it, yay? 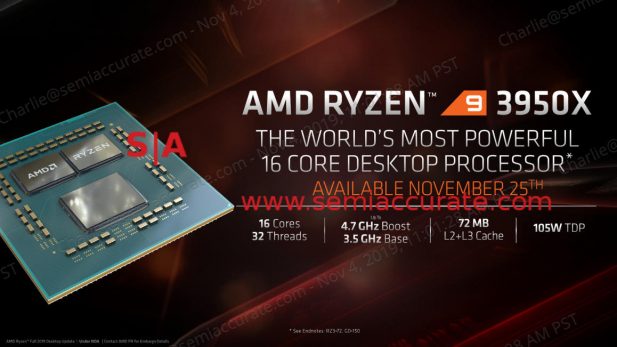 Then AMD launched the 3950X which everyone knows about already. 16 cores, 32 threads, 3.5/4.7GHz base/turbo clocks for a mere $749. AMD put this part up against the Core i9-9920X which it should comprehensively destroy for a fraction of that part’s $1199 price tag and run with the upcoming 10980XE for 3/4 of the money. You will notice that Intel didn’t launch a 16 core part this time around, that alone should show you how competitive they feel they are. Threadripper will crush that line from the top, 3950X from the bottom.

One new interesting bit is the so called eco-mode for the Ryzen 3000 parts based on the Zen2 cores. It allows them to run at a lower TDP, basically the next energy use tier down but not an arbitrary number. The 105W parts can be set to run at 65W, the 65W parts at 45W and so on. Performance for the 3950X in eco-mode is a claimed up to 77% of full speed for 56% of the energy used so not a bad trade. 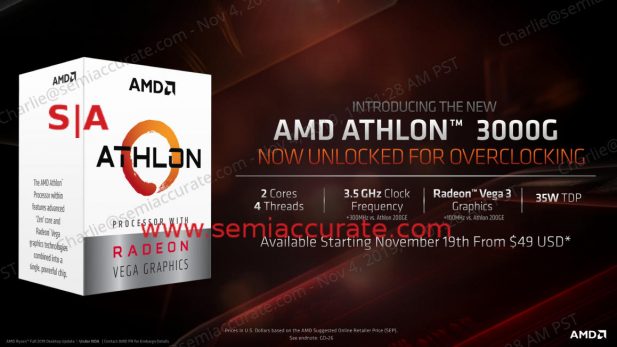 Last up is the new Athlon 3000G, a 2-core 4-thread part based on the older 12nm Zen+ core as you would expect from any APU of this generation. AMD didn’t list the clocks on it other than a 3.5GHz boost clock and frankly by this point we don’t care enough to ask. It has an unspecified “Vega 3” GPU and a 35W TDP. Why should you care? $49 and it is unlocked, a clear shot at Intel’s stupid overclocker tax on most of their parts. If you want to get in to fiddling with PCs, this is the part for you, it won’t be fast or game well but at least it won’t set you back much when you blow it up while scaling the learning curve. It will be out on Novemeber 19, take our advice and don’t line up early for it.

In the end what do we have? Probably the best product line AMD has yet to launch, one that takes the reigns from a product that comprehensively kicked Intel out of the workstation market and raises the bar significantly. You can tell by Intel’s simpering retreat how badly they are beaten here, they have no chance in this market until late 2021 best case. Even on the high end of the desktop the same holds true because of the 3950X, once again the only thing left for Intel is to cut prices and cook benchmarks.

Unfortunately AMD took the worst possible route to tell the world about this, again. They did a teaser in October which SemiAccurate wasn’t aware of until a friend told us it happened, followed by today’s debacle. Instead of giving people the information they want and need, AMD trickled out a teaser which will provide just enough information for people to get an idea, piss off the press, and destroy 90% of the interest in the actual product when it really launches. It is idiotic, self destructive, and par for the course at AMD.S|A