Analysis: Not what it appears to be, and not in a good way

In a recent earnings call, Intel was extremely optimistic about their 10nm progress with CEO Bob Swan saying, “Yields are improving ahead of expectations for both client and data center products. The Intel 10-nanometer product era has begun, and our new 10th Gen Core Ice Lake processors are leading the way.” It sounds great, doesn’t it? It also lead to some financial analysts putting out rosy pictures of the state of 10nm at Intel.

Had those analysts read SemiAccurate for the past few years, they might have been more inclined to ask the question, “Yields are improving ahead of expectations, what were those expectations and what was the starting point?”. Obviously they would not have gotten an answer but they would have looked far less foolish when Intel put out an unprecedented open letter to customers a few weeks later saying that CPU shortages would not be easing up any time soon.

The reasons for the shortages are twofold, Spectre/meltdown and chip size growth. The first of these demand growth factors petered out about a year ago, the second is only accelerating with the pressure from AMD. We detailed shortages previously here, there was not a fix on the horizon then, in fact things were set to get far worse in 2019 and 2020. As SemiAccurate exclusively reported, Intel farmed out some chipset production to Samsung which helped a little.

When AMD released the Ryzen 3000 series CPUs, Intel responded by upping the core count again, with a 10-core Comet Lake CPU that has yet to actually materialize despite being launched almost three months ago. It is almost as if Intel realizes they are in a capacity crunch and has no way to get out of it in a relevant time frame. Like we said months ago.

That brings us to the savior of Intel, 10nm production. If we were cynical we would point to their call again and the quote, “Yields are improving ahead of expectations for both client and data center products. The Intel 10-nanometer product era has begun, and our new 10th Gen Core Ice Lake processors are leading the way.”, then ask what we did about a month ago, “So what it comes down to is simple, in the real world, where are the chips?”

This isn’t a rhetorical question mind you, Intel ‘launched’ the 10nm Ice Lake CPUs at Computex. According to multiple OEMs showing Ice Lake laptops at Computex, the soft launch there was supposed to be a hard launch. Intel delayed that for reasons unknown to the OEMs, finally launching 10nm Ice Lake in August. Without chips actually being available, that happened in September, a few days shy of a quarter late. 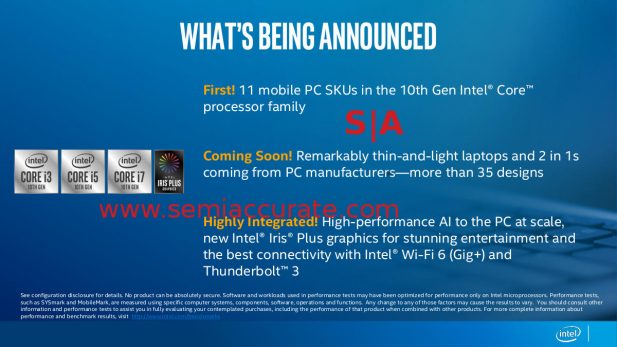 A lot less than you would expect

Intel promised 35 designs with less than half available at launch, the rest later. Don’t forget that the launch was a full quarter late even though the designs were shown in final form at Computex three months prior. The holdup wasn’t on the OEM side. If you have gone to Computex for over a decade like SemiAccurate has, your jaw will have hit the ground at the 35 design number, Intel typically has over double that at launch and a digit more by year’s end. This wasn’t a launch, it was a PR exercise, and a pretty desperate one at that.

This all said you can buy 10nm Ice Lake bearing laptops now and there are more SKUs than there were at launch. Their numbers are still dwarfed by the 14nm Whiskey Lake and Comet Lake devices which both perform better, have better battery life, and sell for less. And Intel can actually manufacture those devices in volume but that is largely irrelevant to the end customer, we aren’t cynical enough to point this out though.

This brings us to the stunning admission of the week found in Intel’s letter to their customers. You can read the PR page here and the actual letter is here. It says in no uncertain terms that the supply shortage that Intel has been staring down for over a year is not going to ease up any time soon. Officially the blame is laid on the growth of the PC market, something SemiAccurate thinks sounds good to the casual observer but is farcical to those that understand semiconductors.

None of the fundamentals we have been tracking that caused the shortages have changed, they have gotten worse. PC growth may have added a little to the problem and farming out some chipsets to Samsung may have eased the pain a bit but the main driver is still there, responding to AMD by bloating the dies. Intel has had to double the size of their dies or more to counter AMD and 10nm is nowhere to be seen in anything other than PR volumes. This will not change for 2019 and 2020.

If you re-read the letter to customers, it does sound rosy and apologetic but is not signed by any of the top three people at Intel, something SemiAccurate considers to be something between an insincere apology and a slap in the face depending on which hemisphere you are in and the cultural mores of the customer. It also allows several levels of escalation should the situation not resolve itself in short order. In case you haven’t been paying attention, it won’t.

Q4 is more than half over, if 10nm was contributing anything meaningful to Intel’s volume like the company intoned but did not state in their Q3 2019 earnings call, this letter would not have needed to exist. It exists, 10nm CPUs in material volumes don’t.

If you think they do, for an exercise go back and look at the last three years of Intel earnings calls and look at how the progress on 10nm has been framed. See a pattern? Now look at the volumes of products that are on the market since 10nm devices shipped for revenue in 2017. No that is not a joke, Brian Krzanich said it in an earnings call directly. See a pattern here?

This is why the supply update letter is so damning but it is also completely unprecedented. First of all this is not the kind of dirty laundry that a company would air in public because it throws all their OEMs under the bus. It basically says the top OEMs won’t have product for you for the next few quarters, please call them and pester. OEMs love this kind of attention, it ties up resources and there is no winner.

More important is the fact that this supply update letter to OEMs and customers isn’t actually a supply update letter to OEMs and customers, it is a disclaimer. If you are an investor in Intel and they come out and say, “we can’t make products”, the stock will tank. If they slide it in an apology letter to customers that is meant to sound good, they accomplish the same notification as would normally happen in an FTC form but hopefully without the stock tanking. It also doesn’t need to be signed by the top executives, but saying that out loud may once again appear cynical.

But there is one absolutely damning bit in the letter that no one seems to catch, it unquestionably states that 10nm is broken and won’t be fixed in the near term. Once again this seems to be nothing more than a disclosure made in a way that hopefully no one will catch. If called on it later, Intel has a widely dispersed document that directly says they disclosed the problem. Think of it as a liability shield for a significant problem.