Intel has a blizzard of offerings at CES 2021

Intel had a lot to talk about at CES with no less than 4 new product lines across consumer and enterprise. SemiAccurate found a lot to like with all of them, especially the vPro Tiger Lake models.

First up we have our least favorite line of the new disclosures, the new Pentium Silver and Celeron CPUs. These parts are technically quite interesting, 10nm Tremont (Atom class code named Jasper Lake) cores and an all new architecture. They come in 6W and 10W variants and will make excellent embedded devices and edge gateways. There are six SKUs at launch, three 6W and three 10W chips. 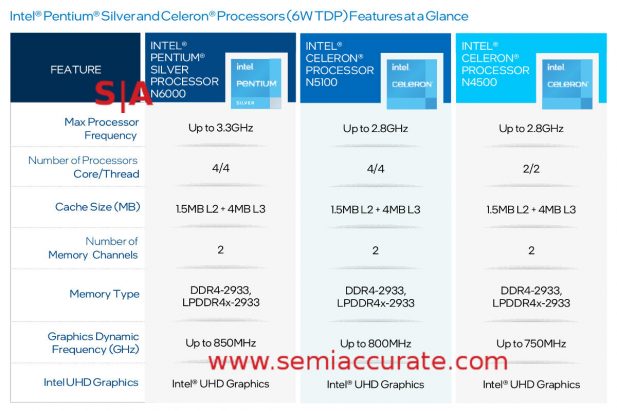 Tremont is a good core for some things

If you add 5 to the model numbers of the 6W devices above you get the 10W versions. On the N6005 this adds 50MHz of peak GPU clocks and on the other two models it adds 100MHz of peak turbo. On paper this isn’t earth shattering but there will be headroom for much longer residency in the higher clock states with the Nxxx5 models so that 4W is worth it if you need more performance.

SemiAccurate’s problem with these devices is twofold. First is that the Tremont core lacks AVX in any flavor so it is an Int chip with crippled FP capabilities. While this is OK for some markets, given Intel’s heavy push for AVX enablement and how strongly their benchmark numbers depended on it, it seems mighty disingenuous.

Speaking of benchmarks, these cores are going to be painful to use in a laptop form factor. Sure they are marketed as the lowest end parts in Intel’s line but there are easier ways to punish a schoolchild than to inflict one of these on the poor lad/lass. We see no reason to get one of these over a low end ‘big’ core laptop, the price delta is minimal and the power delta will be erased by the rest of the system. That said, these parts could be very good in non-laptop scenarios, proceed with caution.

Now we come to the most important release of the day, the new 11th Gen (Tiger Lake) vPro/enterprise SKUs. There are four new models, two 12-28W models and two 7-15W models. Intel has changed their power nomenclature with the low power models ending in a 0 and the high power in a 5 rather than H/U/Y/whatever. This could be a good thing and we hope Intel sticks with it, we’ll know in a year.

In any case this is a very interesting product, it brings Intel’s corporate offerings up to date with a modern 10++nm (Superfin) Tiger Lake based CPU. Given the half-hearted attempts of the last few generations, it is nice to finally see a worthwhile update to the line. As an aside, the author has been looking for new laptop for over a year but could not find anything worth buying. These new SKUs will change that, game on.

What do the new vPro CPUs bring to the table? We would love to tell you but the slides and presentations are filled with crushing buzzwords, platitudes, and basically nothing else. Unmatched this, comprehensive that, AI enhanced, and so on but nothing to tell you what it actually does much less how. Does Intel still see security as a marketing tool or is there something real? Hopefully there will be deep dives on this in the near future but for now just be thankful that you can finally buy a laptop with a solid chassis, minimal blinky things, and a modern CPU. 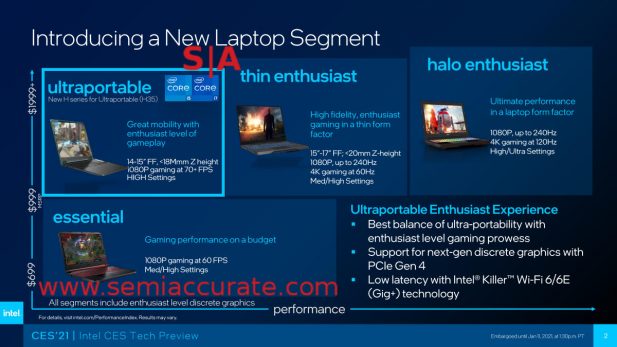 You wanted more segments, Intel rose to the challenge

Just when you thought the marketing tsunami was receding we have a new segment for laptops, four of them now. In the enthusiast sub-segment. If you count them all, and we did, there are 1.38 laptop segments per potential customer. Yes that is a joke. The real number is 1.36. That was a joke too. Seriously though this new segment is for ultraportable enthusiast/gamers who now can rejoice that their long struggle for recognition has finally been acknowledged. Shoot me. That said there are some interesting CPUs that Intel is releasing to cater to this market they just made up, the 11th Gen H-Series, and they are pretty interesting. 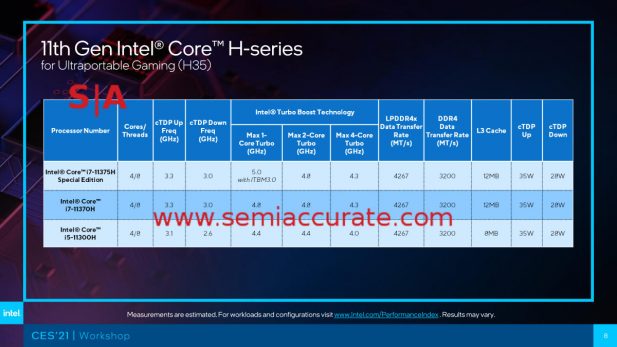 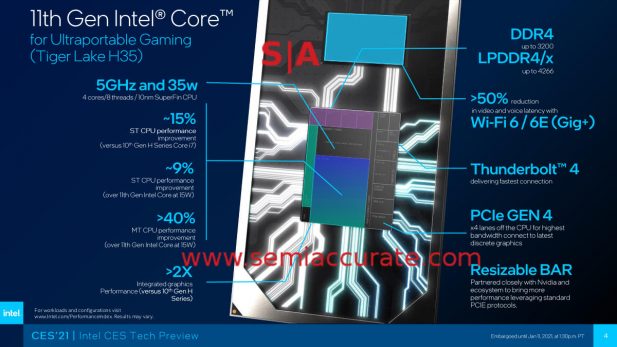 There are some worthy goodies in here

It is interesting to see the claims that Intel is making for these parts versus Ice Lake which is the same core on the older 10+ process. This is a good thing, just keep in mind that the ~15% ST performance uplift is basically from clock, not design, same for the >40% MT performance. Energy use is critical now and this is a direct example of the benefits of lowering real world energy use.

Some of the other claims are a tiny bit dodgy, they repeatedly make comparisons to the 10th Gen predecessors but some of those claims are vs 10nm Ice cores, others vs 14nm Sky cores. That said Intel is really good about disclosure so no real qualms, just parse the fine print carefully. The >2x GPU performance claim is just that, completely true but wouldn’t hold vs a 10nm 10th Gen part. The rest is pretty much expected other than the resizable BAR, something AMD introduced with the Radeon 6000 line so Intel has to implement it too. This is a good thing as are these new H-Series parts as a whole.

If that wasn’t enough we have two new 14nm parts, the 10870H and 10500H in i7 and i5 guises whatever they mean this time around. Not much new here, breathless claims of up to 5.3GHz if you implement Intel’s special turbo modes which few will bother to. Nothing wrong with these parts but nothing to move the needle, just fill in gaps that Intel’s lack of 10nm capacity leaves. 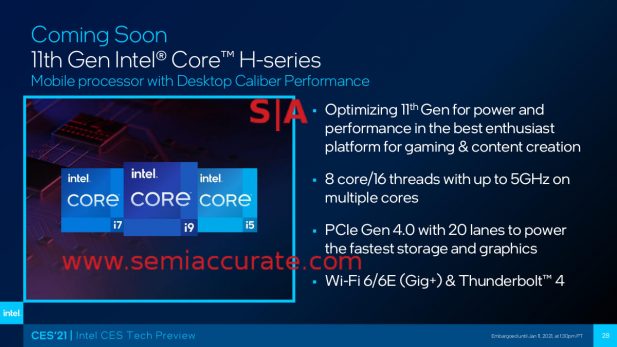 Then we come to the first of the teasers, the 11th Gen H-Series that is not the 11th Gen H-Series above. This other H-Series is the 8-core Tiger Lake devices that were hinted at for the last year. Other than four more cores, what does it bring to the table? Four more PCIe4 lanes and Wi-Fi 6E. The four added lanes are a big deal because you can now have a GPU fully connected AND a 4-lane SSD, it used to be OR. Wi-Fi 6E is nice but the infrastructure is not there yet in the new bands but when it comes, the added bandwidth on clear channels will be a good thing. No details yet but this one could be interesting. 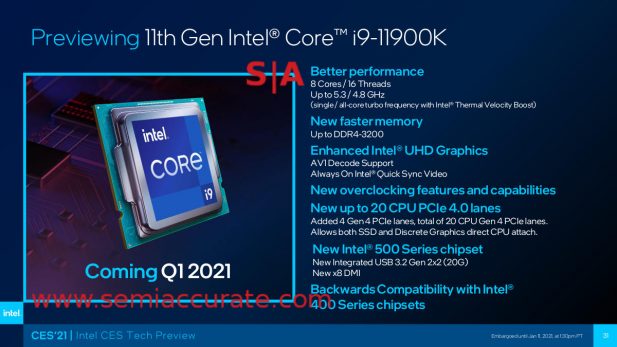 Rocket to where again?

Last up is a teaser for Rocket Lake, the 14nm backport of the 10nm cores we were so fond of the last time it was teased. We would like to point out that we were wrong in the earlier article, Rocket is backwards compatible with the older 400 series chipsets but you lose the benefits of the wider x8 DMI link and most of the new features of the platform. That said it will work.

On the up side Intel claims a 5.3/4.8GHz turbo for single/all cores respectively, 20 PCIe4 lanes off the CPU, and the aforementioned x8 DMI which was a long time coming. Of these the DMI is the most useful as long as there is a 500 series chipset on the other end. Without that the USB 3.2 Gen 2×2 (20G) ports and everything else on that die would be seriously crippled. Welcome to the modern age of connectivity Intel, glad to see you will be here soon. The new video block supports always on QuickSync and hardware AV1 decode, both good things.

Our biggest problem with the backport is power. And die area. Power though is the main issue and it is something Intel did not address with their teaser. Clocks and performance are about where they need to be and Intel claims to beat AMD’s Ryzen 5900X by 5% or so at gaming but TDPs are notably absent. Similarly the i9-11900K is an 8C CPU down from 10C on the 14nm parts. Remember what we said about die bloat? Considering how small the cores themselves are (Note: core size generally does not include L2/L3 caches), losing two and their caches and related infrastructure points to pretty hideous bloat. And don’t forget power here too, most modern devices have far more structures on die than can be simultaneously turned on. 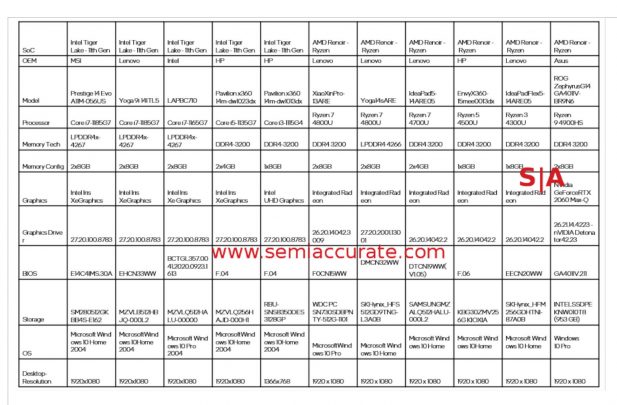 Hey AMD, this is how you do right

The last thing we would like to talk about is disclosure. Intel did an excellent job with their disclosures, a taste of which is above. You can most likely recreate their tests on your own with presumably the same results. In any case you may not like how the numbers are presented or the conclusions drawn but Intel really did right, others not so much but more on that when an embargo lifts at a future date. Well done Intel.S|A