Intel lays out a new direction at Unleashed

Yesterday a more sedate than usual Pat Gelsinger delivered his vision for the future of Intel. Some of these things SemiAccurate had anticipated, some we hadn’t, and a lot of the details were obviously left unsaid.

There were four major topics at the Intel Unleashed event, 7nm, a foundry division, outsourcing, and the return of IDF. Lets take a look at the news as presented for each of the categories even if some do blur the boundaries, then look at what it all means.

Since process technology underpins everything Intel does, lets start there. The 7nm process was said to be production ready in 2023 or about two years from now. When Pat initially made this claim during Intel’s Q4/2020 analyst call in January, SemiAccurate was a bit skeptical and looked into those claims. Based on what we learned we feel a mid-2023 date for 7nm production is possible, how probable it is is a topic for another article.

In January, 7nm was said to be ‘simplified’ which usually means the things that bring the biggest benefits were exorcised for manufacturability reasons. Luckily for us, Intel clarified that the reason for this simplification was that the delays to 10nm and 7nm took it from introduction before EUV was common and mainstream to a time when EUV was ready and available. The simplification meant replacing some complex and defect prone steps like quad-patterning with far fewer steps on an EUV tool. In this case simplification actually means just that and probably won’t have too big an effect on the performance of the end products. The cost of the tools to get there is another story but that will likely come out in the wash with higher yields.

Related to this Pat showed off a Ponte Vecchio package and said that the first consumer 7nm CPU, Meteor Lake, would have it’s CPU tiles tape out later this year. Two years between tapeout and production is quite a long time which should give you an idea on how well the design side and the production side of Intel have been delivering of late. In any case it is a good thing that parts of 7nm devices are bubbling up at Intel even if some of them are made externally.

On the outsourcing front, SemiAccurate has been pointing out for over a year that Intel can’t outsource what some people are calling for because the capacity needed simply doesn’t exist. Intel is significantly expanding their foundry footprint in the US and EU both for an external foundry and internal use. The internal side of the house is just business as usual but the external side is big news.

That external expansion is called IFS or Intel Foundry Services. You might notice that this is very different branding from ICF or Intel Custom Foundry, the last in a series of disastrous attempts at becoming a foundry for external customers. SemiAccurate brought you exclusive news of many of these past foundry ‘whoopsies’, some of which had eye-watering price tags attached. Who could forget this one, or perhaps the one that literally ended a tech giant’s entire SoC program.

The reasons why these past efforts were so spectacularly unsuccessful are varied but Pat spent a lot of time telling you why IFS would be a good idea to bank on this time. They included dedicated capacity for foundry customers, IP availability, standard tools (Note: SemiAccurate told you about this weeks ago), having Cadence and Synopsys on board, US and EU based production, and advanced packaging technologies. It sounded really good but there are some caveats we will look at later. 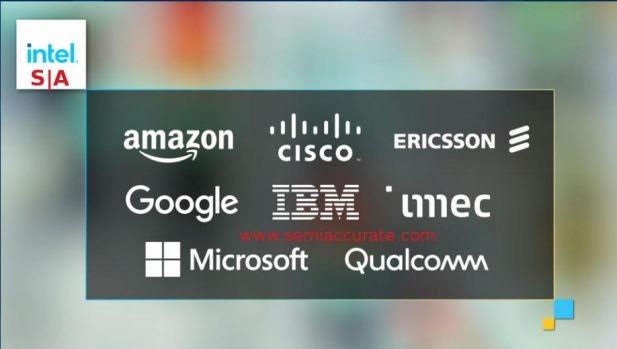 No we are not a partner, that is just a watermark

Then there is the list of partners who are said to be interested in using IFS for their production needs. The slide shown had Amazon, Cisco, Ericsson, Google, IMEC, Microsoft, and Qualcomm. Some of these names have had dalliances with ICF in the past, all to disastrous effect, some are obvious fits, and some are quite unexpected. Gelsinger also mentioned Apple and a few large Chinese Hyperscalers too so the list shown is quite incomplete.

Back to Intel’s production, one topic that was glossed over was 10nm or their current leading edge process. The main throw away data point sounded good until you look closely, Intel said they had shipped over 30 million Tiger Lake CPUs to date, then went on to talk about the design wins. This a problem because Tiger is about a 150mm^2 CPU meaning you can get 3-400 or so out of a wafer, lets say 333.33 for ease of numbers or 3 wafers for 1000 Tigers.

That means 3K wafers for 1M Tigers, 90K wafers for the lot at very high yields. Since Tiger has been shipping for about six months, that means ~15K wafers per month or so will satisfy the demand for the one 10nm product that Intel that actually has demand. We will leave it up to the reader to factor in yields and what percentage of Intel’s output is Tiger, but it is clear that 10nm wafer starts are as scarce as SemiAccurate has been claiming for over a year now.

What is more interesting is the claim by Gelsinger that Intel would be shipping a majority of consumer CPUs on 10nm in Q3 of this year. That means Intel is going to be producing at a rate of about 100m 10nm devices per year on that process. SemiAccurate bases this on the PC market being nearly 250m units per year with AMD claiming a good chunk of it. Half of the remainder is in the high eight digits a year. Once again feel free to run your own numbers but current production capacity will meet the majority of that, outsourcing a little more. To meet those goals, Intel will have to increase 10nm capacity but not by a large amount and likely less than double the current output.

Speaking of outsourcing, Intel did drop one little bomb but not an entirely unexpected one. SemiAccurate had brought you exclusive news about Intel’s outsourcing deal with TSMC and what they are doing with Samsung, but they added two names. Global Foundries and UMC were the two new ones which SemiAccurate found a bit odd because of the processes available at those two shops. TSMC is way ahead of Intel, Samsung is about on par or a bit behind Intel, but the other two are several nodes back. What Intel needs that older capacity for is not clear yet but it could be for tiles that are not heavily dependent on process like analog and I/O.

Then there was the announcement that made most tech geeks smile, the return of IDF. Unlike the moribund marketing slog that was the last few IDFs, this one has a new name, Intel ON, and should correct the wrongs that sank the last effort. At least that is our hope, we will be there ON October 21 and let you know. Ha, see what we did there? Capitalized the ON as a pun… ok it was pretty lame, sorry.

Those are the major topics discussed at Unleashed, lets take a look at what a few of them mean.