There has been a lot of talk lately about Intel delaying their upcoming Meteor Lake CPU but what is really happening? SemiAccurate dug into this and is happy to report on what we found.

<Rant>The short story is we are writing this because we are sick and tired of unfounded rumors that can be easily verified or shot down being breathlessly shouted out by bottom-feeding clickbait sites. We would have put this out over a week ago but have been a little delayed in writing due to something that starts with a C and ends with -19. That said on with the show.

The short story is this rumor is BS and can be easily disproven on two fronts. It is in fact so easy to disprove that the fact that no one seems to have bothered to try annoys us greatly. How can you disprove it? Lets start out with the easy one, process. 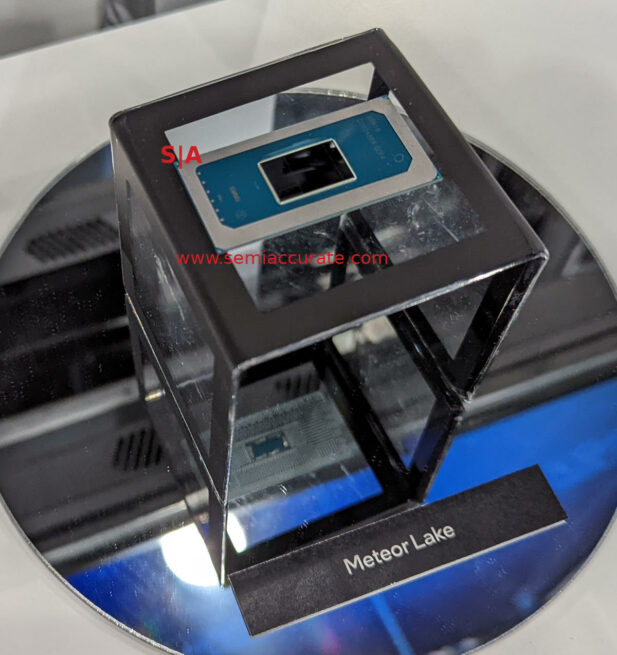 As you can’t really tell from SemiAccurate’s awful pictures, Meteor Lake is multiple dies. Intel has been very public about Meteor being their first major consumer device made on multiple nodes and coming from multiple foundries, some of which are not Intel, TSMC to be specific. While Intel has not commented publicly on what nodes will be used, SemiAccurate has said multiple time, as have many others, that the GPU die will be made on TSMC 5nm. At the recent Vision conference, this was an open ‘secret’.

Now if you go back to the original ‘report’ on this Meteor Lake delay from TrendForce, they talk about TSMC slowing down 3nm expansion because Intel delayed Meteor Lake. Sounds great but, umm, how can we put this delicately, Meteor Lake is not on, and never was on that node. Do we need to spell this out further? Why no one even bothered to check this out is beyond us… no, actually we know how these clickbait sites operate, never mind. Either way I am sure you can do parse the logic here.

The second point is that the so called ‘delay’ to Meteor Lake that Trendforce touts isn’t a delay. How do we know? Well SemiAccurate wrote that Meteor was ‘late’ 2023 on July 11, along with some specs for the CPU. As long time readers are aware, we are not shy about calling Intel on product delays, some might even say we are a tad snarky at times. Even if you carefully parse that story, you will not see the word ‘delay’ used once for Meteor or any other Intel consumer chip. There may be some in the future but none that we are aware of at the moment.

You may be forgiven in thinking that SemiAccurate was a month or so ahead of the rest on the ‘delay’ of Meteor but there is one more data point. SemiAccurate was told of this schedule in Q1 but was asked not to print it until we could get a second source. That took a bit, almost six months to be accurate, but we originally knew Meteor was Q4/23 in Q1/22. If there was a delay it wasn’t recent and nothing has changed from the first hard date SemiAccurate was given early this year. In short from our perspective there is no delay, period. Caveat: Things may change in the future but don’t read anything into our saying this, really.

So there you have it. The original report got the process wrong and blamed it for something else that may or may not be happening, SemiAccurate has no insight on TSMC’s CapEx plans. On top of this the so called delay is nothing more than the roadmap that Intel has been giving to OEMs for 6+ months now, and has not changed in that time. What others wrongly speculated and now have to revise is their problem, the real data does not support their supposition.

On top if this there are a host of clickbait sites that are parroting back this ‘truth’ without even attempting to fact check it or in many cases citing sources. Given how easy it is to find the process node the TSMC manufactured GPU tile for Meteor is built on, this is unforgivable. Sadly such incompetence is par for the course and feeds into the business model of these ‘news’ sites. We will end with this plea, please people, do basic fact checking before parroting back, linking, and in many cases expanding on trivially disprovable rumors. </End Rant>S|A