Analysis: Admitting the no longer deniable in Santa Clara

It looks like Nvidia has slipped their GPU roadmap a year, but that is news to no one. The biggest shock of them all is that the company actually admitted it slipped, even if it is two years after the fact.

The short story is that Nvidia has once again admitted what SemiAccurate has been saying for literally years, their GPU roadmap had no chance of being released on the schedule they were promising. Without getting in to the gory details, the story is exactly as we have been telling our consulting clients, the Fermi debacle has waterfall effects on the entire roadmap, and that is finally starting to show up in official documents.

If you recall, Nvidia doesn’t give out long term roadmaps until they are way behind, and want to ‘prove’ that they are not. Until the Fermi debacle, there was never any comment on future roadmaps, but to ‘prove’ that all was well, the company started tossing them out like candy at a parade. The problem now is when those roadmaps can’t be met because they were never realistic, they become just stock price adjustment tools for the unwary analyst.

When the silicon doesn’t match the roadmap, the silicon is renamed, and the roadmap stays intact. The most recent example of this is Tegra 4, a chip that was code named T40. T40 had zero chance of coming out on time due to executive meddling, micromanagement, and engineering through whim, so Tegra 3.5 was inserted. T40 is now Tegra 5, T50 is now Tegra 6, and T35 was always meant to be there. Executive face saved, roadmap intact, nothing to see here, move along folks. The silicon for the roadmaps is completely different, but the slides are reusable. 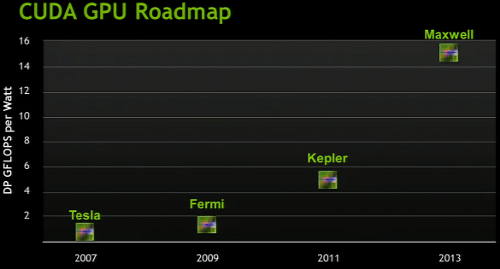 The way things were for too long

That brings us to the latest slip, the GPUs. Remember that Fermi was promised to rooms full of analysts for 2009, and Jen-Hsun himself waved faked cards around to ‘prove’ it. Until a few weeks ago, the GPU roadmap shown off by the company was still insisting that the GPU came out in 2009, even though it was not released until Q2/2010. That curious situation didn’t change the fact that the roadmaps still claimed otherwise for all of 2010 and most of 2011.

Those same roadmaps claimed that Kepler will be a 2011 part, even though the company directly said that it will not be. Luckily at GTC Asia in mid-December, Nvidia corrected that slide, two years late, to say the same thing we have been telling the financial community for two plus years. It now seems that Fermi was actually 2010, Kepler will not be 2011, and Maxwell went from 2013 to 2014. Who knew? SemiAccurate’s clients for one, but no one at Nvidia management seems to have been let in on the joke. 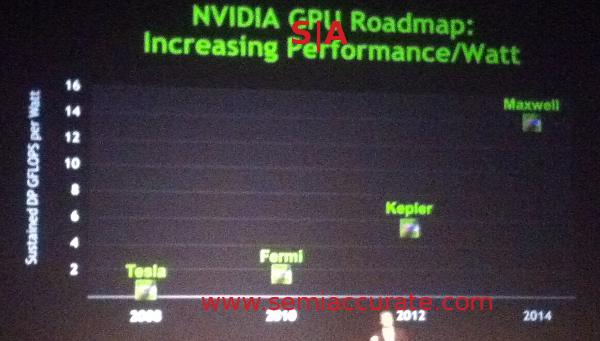 The way things are, and always were, just ask

The short version is that their roadmap slipped a year. Kepler is 2012, and Project Denver/T50 which is based on Maxwell, is not, and never had a chance to be a late 2012 product, much less early 2013. Then again, it was never meant to be, unless you were an analyst talking privately to the company, they got different timelines for some reason. Since Denver is based on a core that has now officially slipped from 2013 to 2014, well, you can do that math yourself.

In the end, it is refreshing to see Nvidia finally admitting that there is a slip, even if it is in a backhanded and circuitous route. Their roadmaps slipped a year, but that isn’t a change as much as a semi-public admission of the no longer deniable truth. I suppose congratulations are in order for this milestone, lets hope the personal growth in Santa Clara continues.S|A