One really neat trend at the Sandforce/LSI IDF booth was large capacitors on SSDs. In short, they carry enough power to save their buffer out on power loss, but how they do it is interesting.

The tech isn’t exactly new to SSDs, but it is uncommon enough that most people don’t know about it. Flash storage backed up by batteries or ultracapacitors is also nothing new, LSI does it on several products currently in the channel. What is unusual is doing it on the drive in a commodity product, it was always the domain of the high-end-cost-no-object enterprise set. That is why we were surprised to see not one but at least four variants at the Sandforce booth, and a few others elsewhere.

Supercaps and not so special caps abound

There were three basic versions, supercap and standard discrete polymer cap Toggle flash reference designs, plus an ONFI supercap design. No doubt there is an ONFI not so special cap design somewhere too, but the idea is many different kinds all there for the licensing. Anyone can buy a license and put a company sticker on it, what was the domain of high margin sales is now commodity. 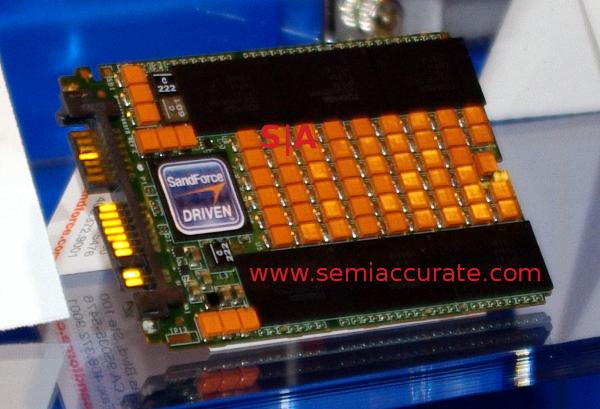 Smart and Modular from Smart Modular

The most interesting custom variant was from Smart Modular, as you can see it is not exactly plain. We could not find the specs on this drive anywhere, but it sure looks special. Other custom designs will flow in short order, Kingston has one out now, and others likely do too. There is a price premium, but now it is percentages, not orders of magnitude.S|A