IDF 2012: And finally a multipathing SAS concept that works

LSI had some SASsy goodies to show at IDF including the first production 12Gbps controller SemiAccurate has seen. Not stopping there, they are also pushing the boundaries of DAS vs NAS vs SANs as well.

The first one up is the a production 12Gbps SAS controller/RAID card. As you can see below, it has all the goodies, supercap backup, flash storage, and the rest that the 6Gbps cards have. It is a complete solution, and should hit the market long before 12Gbps devices do. If you know anyone on the drive side, pester them to hurry up, 12Gbps drives are sorely needed now. 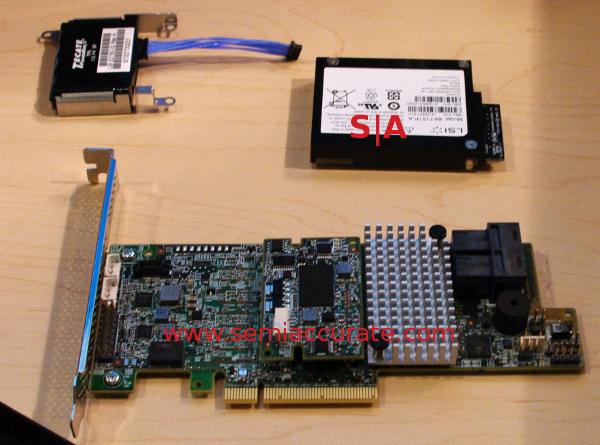 Why do you want to bother with a 12Gbps controller a year before you can plug anything in to it at that speed? Because it actually can do a lot of good. LSI was showing off a Xyratex enclosure with 24 Intel 320 SSDs in it backed by their ‘Databolt’ buffering tech and a 12Gbps SAS card. The throughput was a mere 3022MBps, not Mbps mind you. The only reason it wasn’t much faster is the PCIe interface on the host server was not fully optimized yet, so expect things to get about 50% faster when release drivers are available. Not bad for a bunch of 3Gbps drives in a box.

LSI’s next demo was almost a very good idea, and will be a very good idea once it is out for useful OSes. The concept is called HA-DAS, basically two servers hooked up to a drive array with SAS’ native multipathing capabilities. The controllers have a hardware heartbeat and failover capabilities, so you can get most of the goodness of a NAS or SAN from a DAS. 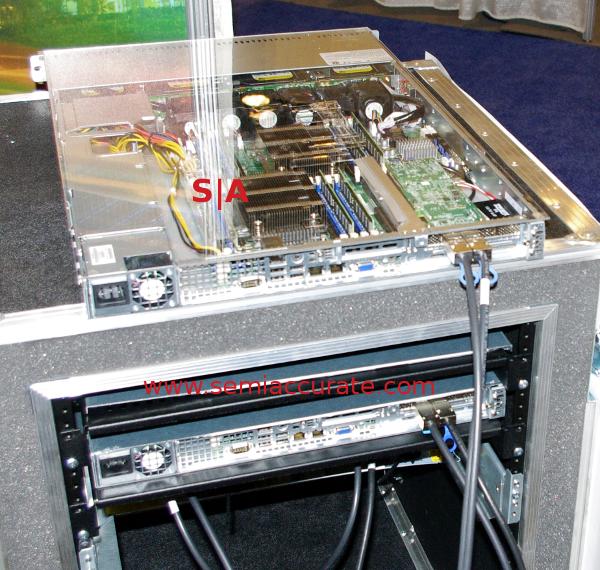 HA-DAS could be a good idea

In concept, a high availability drive array at DAS prices is very attractive. The problem? Windows only for the moment. Any protection you get from the hardware is more than given up by the software, and that trade is simply not worth it to all but the dumbest out there. Once HA-DAS moves to their mainstream line instead of a bespoke kit with two controllers and cables, it will be a great idea. For now though, the handcuffs are not worth the benefits, it is a net negative.S|A