LSI has a new family of products, meet Syncro

CS and MX for server reliability

LSI has a new name for the HA-DAS shown at IDF, plus a family to go with it. The line is Syncro, and the new member is the datacenter oriented Syncro MX

The product formerly known as HA-DAS is now called Syncro CS, and it is aimed at the SMB market and enterprise branch offices. The idea is to have high availability through shared storage, a point made rather moot by it’s Windows Server ties. Once it comes out for an adult OS, it will be a very good thing to have, but until then, you can rest assured that your malware ridden box will be serving spam without any downtime.  During Microsoft’s keynote yesterday Microsoft claimed that Syncro CS will be great for local redundancy in data centers, but, um, there is that Microsoft issue again. 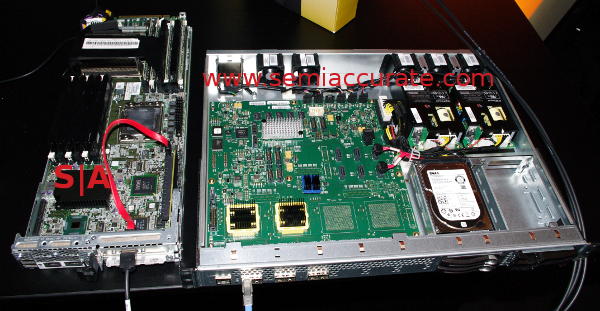 Blade on the left, 24 port Syncro on the right

More interesting is the bigger brother to CS, the Syncro MX.  MX is unquestionably a data center product and it attacks two of the more pressing problems for that market, energy use and reliability. Cost isn’t left out either, but it is secondary to the other things.

Syncro MX is a simple idea, take a few 2.5″ drives connected to an LSI ROC (RAID On Chip) on one side, FPGAs on the other, and mini-SAS ports out the back of the box. This lets you remove the boot drives from a rack of machines and replace it with a single 1U Syncro MX. Instead of a cheap failure prone SATA drive in every machine, you have a single RAID array on the MX serving it all.

From the drives to the ROC, it looks like a normal RAID array. The FPGAs then break those out in to 12 SATA streams, so two FPGAs in the 24-port MX shown above, four in the 48-port version. From there, standard eSATA cables run to the back of every server in a rack, and the servers see them as a DAS device. The Syncro MX is essentially an eSATA boot drive for a full rack of servers.

Why would you want this? Power and reliability. 24 or 48 single HDs take quite a bit of power, four or eight 2.5″ drives, a raid chip, and a few FPGAs take a lot less. LSI is claiming 40% less electricity for the 24-port version, 60% less for the 48-port. In addition, instead of a single point of failure in the HDD, you have a RAID volume that should not go down. Instead of two drives per machine for minimal failure resistance, you can have three per rack.

In the first version, Syncro MX will only slice the RAID volume up symmetrically, so two TB drives will get you 40GB per machine, but that is plenty for a boot volume. Once it is up and running, all the real data is pulled off a SAN, so raw performance isn’t an issue either. The Syncro MX solves the two main problems of storage in racks, reliability and power use.

How much does all this cost? LSI isn’t saying yet, mainly because the product isn’t out. They will say that the TCO of the system will be less than the TCO of running the drives alone, the reliability comes for free. Since booting only happens once, or at least the bandwidth intensive parts are a one time affair, this frees up the SAN for higher priority work. That pays latency benefits for every other box on the system too, so no complaints from peers.S|A