Lenovo shows off their engineering prowess at CES

CES 2013: The details, not necessarily the package, make the product

Lenovo had some headline grabbing products at CES, but few people reported on why these devices are better than others. The short story is it comes down to engineering and sweating the details, a few teething problems aside.

The first one up is the IdeaCenter, sorry IdeaCentre Horizon, a 27″ All in One (AIW) PC that folds flat in to a tabletop compute device. It is a full PC with up to an i7, 8GB of DDR3, and a 1TB HD. On the down side, all that screen and only 1920*1080 pixels, but I suppose Intel is more to blame here than Lenovo. It also has a claimed two hour battery life, tiny by laptop standards, but given the bright 27″ screen and the fact that it is really a desktop replacement, quite impressive.

IdeaCentre Horizon in Aura with a striker

This whole concept of desktop to tabletop seems forced and artificial, but you can’t blame Lenovo for that. Microsoft’s OS isn’t an easy sell.  However, Lenovo is doing quit well with their attempts at sales with Windows 8. As we said about the Intel keynote, why would you want to spends thousands to replace a board game that costs a fraction of the price and never runs out of batteries? You wouldn’t, but MS is pushing this paradigm hard, and Intel et al won’t do the right thing and push back. So the whole category of tabletop/flat folding AIWs is thrust upon a world that doesn’t want it. This is what the industry now calls innovation, is it any wonder PC sales are dropping like a rock?

That said, while the category is borderline moronic, Lenovo did do what I consider to be by far the best job of it. In fact, they did some things that were not just unique, but dare we say it, innovative. They won’t change a thing about the category, but the engineering is very well executed. The battery for instance is rather handy, and getting two hours out of a bright 27″ screen is not an easy task. If you think about it, a stand that allows both adjust-ability as a desktop screen and then goes to completely flat operation is again harder than it looks, especially with a 27″ screen. These are both details that can make a difference between a bad product and a good one, and Lenovo definitely did things right. The unit feels good, solid, and doesn’t have any obvious flaws.

They have a touch UI/desktop environment called Aura that pops up when the unit is laid flat on a table instead of the Windows 8 OS. It is not angle dependent and has a circular UI in the middle, and meant for multiple users to show, slide and manipulate things like photos on a tabletop. There are also some games bundled with the Horizon that work with the strikers pictured above, either as a joystick or a moveable input device for an air hockey type game. Also included are ‘e-dice’ that need to be charged and… and… this is getting silly, I mean really, e-dice?

Unfortunately this is all based on Windows 8, and all the things that you could do are slow, even with a full i7 behind it. Lag is painful, and tracking is OK but not amazing. This could have been the pre-production unit we used, but it is similar to all Windows 8 devices SemiAccurate has used, Microsoft’s touch implementation is painful to use.

That said, Lenovo went far above and beyond what most will do on the Horizon, they bent over backwards to make it usable and user friendly. The software they included does the right things to make the paradigm workable, and they did an admirable job patching over the flaws of Windows 8. In the end though, Microsoft foisted an ill-conceived and broken paradigm on OEMs, wrapped it in a dysfunctional OS, and released it far too early. Lenovo did everything right with the hardware engineering and software bundles, far above and beyond any other SemiAccurate saw at CES.

Moving on to better things however, we come to the Erazer X700, Lenovo’s first serious stab at an enthusiast gaming PC. This is the first fruit from the purchase of UK’s Medion, and it is far better than the in-house version Lenovo tried a few years ago. This one has lots of options, liquid cooling, dual GPUs, and three monitor support out of the box. It should be upgradeable, fast, and best of all, quiet. AMD and Nvidia GPUs are supported, and you can get Intel CPUs up to a high end i7. 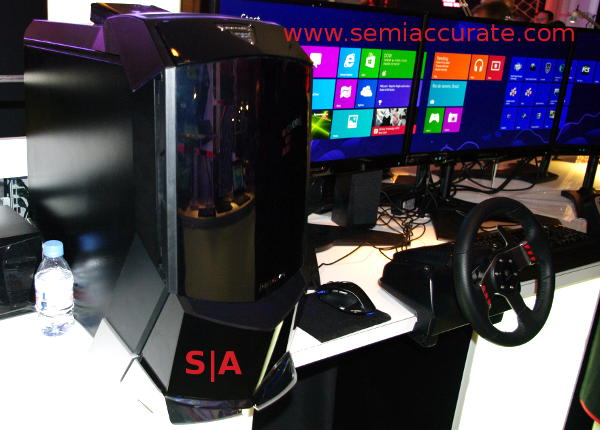 There are two things that stand out on the Erazer, the buttons and the software. The buttons on the top panel are power and turbo. The turbo is a handy throwback to the PC/XT days where that button would just kick up the speed of the machine without a reboot. In the X700, the turbo is good for 4.3GHz on all cores, not just one. The Lenovo engineer at CES was quite proud of this achievement, getting that speed on all six cores is tough, and most competitors will only quote one core overclocks. Cherry picked CPUs, lots of effort on getting cooling right, and some software tweaks are behind these numbers, so 4.3GHz should be achievable to all if you get the right initial CPU.

The software is also a step above what you get from most cheap ‘enthusiast’ systems, and it ties in nicely with the hardware. The front panel turbo button is an on/off thing that defaults to either no overclock or full on top speed. With the OC software provided, you can modify most of the desired enthusiast settings without a reboot and BIOS tweaking session, and also change the defaults for the button. Handy, and it shows that Lenovo did more than slap a bunch of channel parts in a box and sand the edges off a cheap case. This one is solid enough, much more so in light of it really being a first effort. The next generation should be very interesting, keep an eye on this line.

Moving on to mobile solutions, you probably have seen the half dozen or so convertible/detachable/twistable/foldable/whateverable UltraThinTabletThingies that Lenovo had at CES. Everyone else did too, and Ultrabooks are still a bad idea by design, but like the Thinkpad line, Lenovo did everything better than the rest of the pack. Some of the new devices are simply OK, but some like the Thinkpad Helix have features that are no less than amazing engineering.

The Helix feels like a Thinkpad when you pick it up, solid with every surface feeling good in your hand. Nothing is cheap or tinny, and there is even a digitizer pen built in, a useful rarity nowadays. Best of all is a very slick one handed screen release mechanism that no one else has, and it works quite well even though the mechanism is fairly complex. That is what the extra effort Lenovo puts in to the Thinkpad line gets you, everything works the right way for the right reasons. Except the OS, but we won’t go there again. [Editor is thankful.] 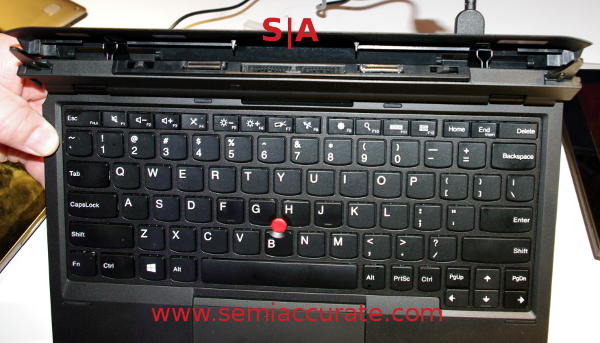 Better yet is the cooling solution. Take a look at the picture above, the ports are pretty standard other than the grate under the S|A logo. It is exactly what it looks like an air vent for the tablet portion. When the screen is docked, the base has extra cooling built in to assist the ones in the screen for quieter and more efficient operation. This more than anything is why we say that Lenovo sweats the engineering details, does anyone else bother doing things on this level? Dozens of details like this are why the last few laptops I purchased were Thinkpads.

Last up is something we weren’t expecting to see at the Lenovo suite, the IdeaPhone K900. This phone is not only huge, it has a 5.5″ IPS screen, but has almost silly resolutions. How does 400+PPI in your phone sound, I mean look? At 5.5″, that means a full 1080p picture on your phone, very few of the full sized Lenovo laptops can even be optioned to this resolution, and now they put it in a phone? This is probably progress, but it hurts our head a bit. 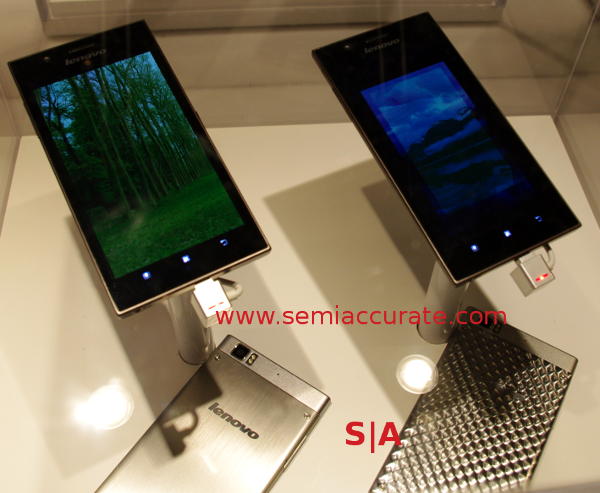 On the plus side, the K900 has a 13MP camera on the back and an ultra-wide angle lens on the front camera. It uses a dual core Atom to run Android 4.2, and stuffs all this in to a 6.9mm thick package. Not only that, but this rather massive phone just looks good. It is understated, sleek, and while some finishes are not to our liking, is does seem to work together as a seamless whole. Not too many details were given, but it should go on sale in China in April, so it won’t be long now.

Overall, Lenovo had a bunch of products that were somewhere between very solid and best of breed. The concepts behind them like AIW/tabletops and Ultrabooks may be abjectly bad ideas from Microsoft and Intel respectively, but again that isn’t Lenovo’s fault. They took a bad idea and got probably the best from them that anyone can. The engineering is first rate, especially in the Thinkpads, and it shows. Now if only Lenovo put out a true successor to the X200 line, say with the IdeaPhone’s screen and the Helix’s advanced cooling, I for one would wait in line to buy it.S|A