TI comes out with DockPort silicon

Texas Instruments just put a chip through the heart of Intel’s Thunderbolt folly with their new HD3SS2521 DockPort controller. This little $1.85 chip both vastly simplifies the user experience and shines a harsh light on what Intel can’t do with a closed and 75x more expensive solution.

If you haven’t been paying attention, DockPort is the sane and open answer to Intel’s still broken and anti-user Light Peak/Thunderbolt interface. Formerly called Lightning Bolt, DockPort was AMD’s answer to the non-solution that Intel tried to spin Thunderbolt as. Several years in Thunderbolt is achieving some of the features promised at release but the important ones will never happen. One major bug, channel bonding, is mostly fixed, but the rest aren’t even being addressed because they are technically impossible. Meanwhile DockPort just works right and is actually useful to users.

DockPort is pretty simple, take a USB3 signal, a DisplayPort 1.2 signal, and enough power to run a laptop, then route it out over a standard DisplayPort cable. On top of that the TI HD3SS2521 adds a USB2 and I2C channel, something that is probably in the DockPort spec but we didn’t notice it last time we looked. In any case it takes what already exists and users like and puts it on one inexpensive cable. The cost of the TI chip? $1.85, more than the $1 we estimated earlier but for first silicon that is not a bad number. As soon as a second player comes out with silicon, this is sure to crater to $1 or below.

Compare this to Intel’s Thunderbolt. Even overlooking the fact that it does not actually work right in the overwhelming majority of devices out there now, it still is a non-starter. It carries 10Gbps per lane, two per cable, that are not bondable with any current device on the market that SemiAccurate is aware of. So you can have a video signal with limited resolution due to the lack of speed and a 10Gbps PCIe/data stream, or two of either type. What you can’t do is have anything more than 10Gbps of either type and use any bandwidth for the second. Unlike what Intel says publicly, it is not a malleable 20Gbps link, that claim is total fiction. Luckily it will provide up to 10W of power over the cable as long as you are not using an optical cable, not enough to power anything more than a single 2.5″ HDD. Thunderbolt is fundamentally a bad design that has never been implemented correctly and never will be.

Luckily for this privilege you pay and pay and pay. Intel is the only supplier of Thunderbolt chips and they have no plans to license it because the main point of this ‘standard’ is to exclude competition. A vibrant ecosystem with competing suppliers is the antithesis of Intel’s aims for the technology, if they truly open it there is no reason to pursue it farther.

This allows Intel to charge a painful price for Thunderbolt controllers, about $20 per controller or 10x what USB3 vendors charge per Gb. Per end of the cable. Plus you need to replicate the controllers in the end device, remember that Thunderbolt only passes PCIe or DP1,1 but not both. Then there are the active cables, they are now ‘only’ $36.48 at Newegg. For a .5m cable, that is 1.6 feet. Useful eh? At least they go up to 3m/9.8 feet for only $76. For reference 15 foot DisplayPort cables cost $10.99 on the same site, and you can get much longer ones should you require it.

So doubling the cost of the chips to get end-user pricing, Dockport will run $3.70 per end, $7.40 total. Throw in a 15′ cable for $11, and triple that to add heavy-duty power capabilities and generous margins. That adds up to $40.40, $3.84 less than a 2m Thunderbolt cable. Prices for DockPort cables are sure to crater after release and a 15′ cable is quite generous too, so think of this as a high water mark.

If you take the cheapest .5m Thunderbolt cable at $36.48, you can’t get a 15′ Thunderbolt cable that I can find, and add in $40 at each end, you are at $116.48. This is before the cost of replicating controllers in the Thunderbolt device, powering it, and only applicable to those who keep their laptop .5m or less from their Thunderbolt port. Even if you can find a device to work with Thunderbolt, it won’t charge your phone, it won’t let you plug-in HIDs, and won’t let you do very much that is even remotely useful. All for a painful cost.

If you assume an OEM can source a DockPort cable for roughly the cost of the cables it replaces, and they pay a little less than quantity 1 retail cost for silicon, you can probably add Dockport to your laptop for $2-3 end-user cost. That is more than an order of magnitude less than the cost of a Thunderbolt cable alone, much less inclusive of the vastly more expensive chips. Intel being the only supplier has no reason to negotiate on costs either, besides that would destroy their MDF funding operation. Lest we forget to mention it again, Thunderbolt doesn’t actually work right either, USB3, DisplayPort 1.2 (now anyway, not true a year ago), and DC power are pretty foolproof standards.

If you make a docking station using DockPort as the standard it is both simple and low-cost starting with a $1.85 HD3SS2521. Add in some power circuitry to feed DC across it to the laptop if you want, or you can just plug your laptop’s power brick in to the controller and run a couple of wires. If you do that the cost is pennies for the internal cable and physical DC connector. The video signal is vanilla DP1.2 so you can simply run three monitors off of it with DP1.2 or if you want to be fancy put in an active converter to VGA, HDMI, or DVI for a few dollars. Throw in a $1-2 USB3 hub like the VIA VL812 plus a button and blinky light controller and you are looking at $10 or so, double that end-user price, for a passive DockPort docking station with one cable. Note that this is around half of a .5m Thunderbolt cable or far less than the cost of an optical Thunderbolt cable for a fancy active one that mates to your laptop. If you look at the wiring diagram in the TI datasheet, you can see why it isn’t going to be expensive to make these things. 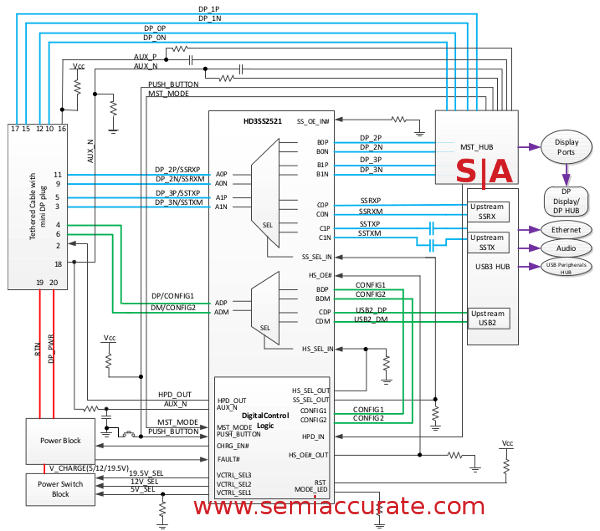 Traces and <$2 chips do more than the $150 competition

Compare that to a Thunderbolt dock, it starts out with a $20 chip that then needs to add several controllers to it. If you want DP you can have it, but only DP1.1 for the moment, add a second high rez monitor you are not going to be doing much data traffic because of bandwidth constraints. Want USB? Add in a USB controller. Want sound? Add in a sound chip. Want SATA? Add a SATA controller. Need more than 10W of power? Add a power brick too, one that can’t power your laptop or the monitor either. Then wire it all to the device with a cable that costs significantly more than the most expensive DockPort hub. It isn’t a fair fight and never will be.

With the HD3SS2521 DockPort controller TI hit one out of the park. It works. It is what people want. It provides a useful 1-cable dock, power included, to a laptop for a cost that is rounding error for even the cheapest laptops on the market. It uses standard connectors, standard protocols, and is an open spec. TI just killed Thunderbolt, not that it was ever alive to begin with. About time.S|A