LSI is finally launching all those SAS12 goodies that they have been talking about for the last year, ROCs, IOC, HBAs, expanders, and RAID cards. While there isn’t much new news here, the goodies are finally launched.

There are three main families of products, MegaRAID cards, SAS HBAs, and bare chips to talk about today. The MegaRAID cards are the ones we told you about in 2012 but now have an official name, the 9300 series. There are three versions, the entry-level 9341-4i/9341-8i, mid-range 9361-4i/9361-8i, and high-end 9380-4i4e/93808e. The numbers after the dash signify how many ports are internal (i) and how many ports are external (e). Digits one and two signify the line(93), digit three relates to cost although LSI may argue that it is about features too, and the last digit is either a zero or one for no discernible reason unless it is a parity bit. 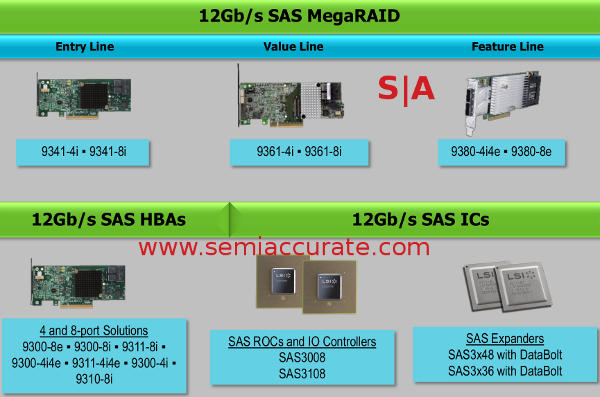 Next up is the new family of PCIe3 SAS12 HBAs aka SAS controllers sans RAID. These replace the aging PCIe3 SAS6 HBA line we wrote up earlier. The biggest difference between the two is the old one starts with 92 and the new starts with 93, that and the SAS12 support. Other than that minor detail the two are quite similar, internal vs external port count and supported features are what set them apart.

Last up is probably the most interesting bit, the silicon. Bare chips are not usually that exciting but what they go in to can be quite cool. The ROC stands for RAID On (a) Chip and it allows you to make RAID cards. More importantly it allows you to make things like RAID enclosures and storage appliances. With this line, LSI will spawn a bunch of third-party storage devices that will seriously up throughput, doubling interface bandwidth tends to do that.

SAS Expanders tend to get no credit for anything mainly because they are assumed to be a glorified breakout box. In this case the two ASICs have 36 and 48 ports so effectively 9 in and two sets of 9 out or 12 in and two 12 sets out. This time LSI put in something they call DataBolt, SemiAccurate covered the tech here. The idea is that it intelligently uses caching and can gang SAS6 drives together to push SAS12 speeds.

With one in and two out expanders you can see how the math works, right? That said it does work, the early silicon demo linked above was already pushing a bit more than pure SAS6 could and that was 18 months ago. Since then things have gotten much better tuned and demos have shown performance faster than SAS6 is capable of with SAS6 drives. We will probably see the final version at AIS later this week and get you some more recent numbers.

All in all not much earth shattering to report. LSI has a top to bottom SAS12 line with some goodies thrown in. The MegaRAID 9300 line replaces the SAS6 9200 line and the HBAs get a similar upgrade. The real interesting things are going to happen when third parties announce devices built with the two silicon lines, but that will take a while to surface. Until then you will just have to roll your own.S|A