Architecturally a bigger step than the numbers suggest

Yesterday Qualcomm introduced the Snapdragon 670 SoC which brings a bunch of premium features to this tier. There is nothing on the chip that SemiAccurate found groundbreaking but a few features were interesting.

The new Snapdragon 670 replaces last year’s 660 and it is of course 10 better. Without any technical info to back up the performance claims, we won’t get in to how much better it is, but we don’t doubt substantial performance gains on this new part. More importantly the new 670 is build on an undisclosed 10nm process so power should drop as well. What is more important is the generational changes in the sub-units. 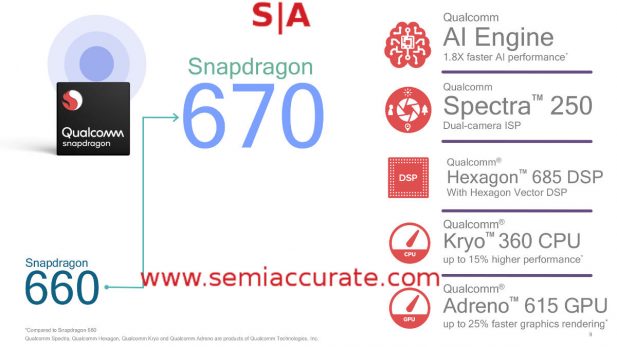 What we mean by this is that the 670 now has the latest architectural generation of GPU, ISP, and DSP that Qualcomm offers. The company is quite keen about describing the trickle down of tech from 800 to 600 to 400 to 200 series, and here is more proof. The GPU is now an Adreno 615, ISP is a Spectra 250, and we have a full Hexagon 685 DSP. The raw numbers aren’t important here, just that the code base for high end phones can now run (hopefully) unmodified on the mid-range offerings.

The Spectra 250 is probably the biggest user facing bang mainly because of all the features this new architecture brings. This can all be summed up as a superior computational photography pipeline and brings things like multi-frame noise reduction, super-resolution, and video features to the table. It also does it at a claimed 30% lower energy use, something users will see in practice. That said the extensibility of this new pipeline is what SemiAccurate is most excited by. Almost forgot, 25MP single camera support, 16MP for dual.

Putting a full hexagon 685 DSP into the 670 is a good thing for both computational imaging and AI. Qualcomm bundles the DSP, GPU, and CPU into an AI framework it calls AI Engine. This is said to be 1.8x faster than the Snapdragon 660. Given the generational change in architectures, this one isn’t a stretch to believe. Adreno is another uplift with things going to the 6-series based 615. Unfortunately we know nothing about the architecture so, well, it is a 615. 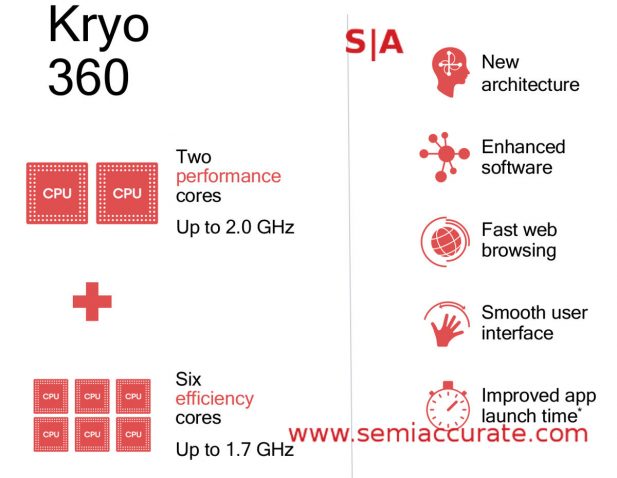 2+6 is an interesting configuration for cores

On the CPU side things are a bit similar in that we have Kyro 360 CPUs which are modified ARM cores but which ones? How much modifications? What we can say is that the configuration is pretty unusual, not bad unusual but interesting unusual. Qualcomm put in two big ‘performance’ cores running at 2GHz and six ‘efficiency’ cores running at 1.7GHz. It will be interesting to see how this configuration works on benchmarks, it should do much better than 8x small cores without a big area penalty.

Last we come to the radio side and the X12 Cat 13/12 for 600Mbps downlink, 150Mbps uplink. This is a good thing and a high efficiency modem really separates Qualcomm from the pack in the class of phones the Snapdragon 600 line targets. No not for the customer, they usually don’t care, but the carriers do. For them this is a big incentive to push Qualcomm based devices, it effectively gives them more to sell.

So overall the Snapdragon 670 is a small step from the 660 in many ways but a big step architecturally. It brings high end tech to the top of the mid-range phone market while adding connectivity features the carriers need. It’s not a halo, it won’t set the techies heart’s aflutter, but it should do a solid job in the category it was designed for.S|A