The latest Intel roadmap leak blows a gaping hole in Intel’s 10nm messaging. SemiAccurate has said all along that the process would never work right and this latest info shows that 10nm should have never been released.

You might recall last October that SemiAccurate said Intel killed 10nm. We were wrong about the conclusion but had all the underlying facts right. Intel moved three of the four fabs slated for 10nm to other processes, some are going to 7nm while others backported to 14nm. The count now stands at between one and two depending on who’s numbers you believe but that is nowhere near enough to satisfy demand.

If all of Intel’s 10nm fabs pump out silicon at near 100% yields the company will still only be able to move a fraction of their products to the process. Yields are nowhere near 100%, in fact they are not at a level that is profitable. If you are thinking that Intel will move more fabs to 10nm as yields increase with time, don’t hold your breath, to the best of our knowledge none are headed in that direction.

So Intel’s 10nm process is deprecated, will never have viable yields, is slower than 14nm according to Intel’s own numbers, is more dense, and is much more power efficient. One conclusion you can draw from the 10nm mess is that it will never make money and should never have been released. How can we be so sure? You can see it in the roadmaps released by Tweakers here. 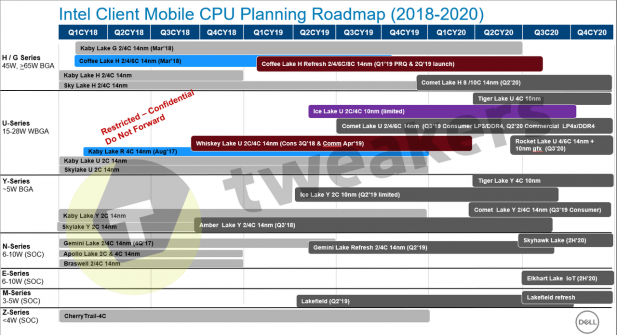 SemiAccurate has long said that 10nm CPUs would be a Q4/2019 product, even back when Intel was claiming it would be much sooner. They knew it had no chance of being a 2018 product or even an early 2019 product but they carried on with the narrative digging their hole ever deeper. Then they hatched a plan to make a very limited number of CPUs and politely asked OEMs to put out a laptop with a 10nm Cannon Lake CPU and, “make it look real“. Once outed that plan seems to have died a well deserved death.

Now look at the roadmap above. Note that 10nm CPUs appear to be pulled in to mid-2019, that means 10nm is doing better than expected right? If you noticed the, “(Limited)”, and “(Q2’19 limited)” after the 2C/4C Ice Lake-U and 2C Ice Lake-Y respectively. Think this is real or a PR stunt once again? Word hasn’t reached SemiAccurate about how Intel is going to parcel these out yet but rest assured at Computex there will be a wall of devices and Intel will claim the chips and process are real, healthy, and a big leap forward. We don’t believe it.

Another interesting piece is that these roadmaps back up our earlier statements that 10nm performance wasn’t better than 14nm and that yields are not good. How do they do this? The U- and Y-series are low power and comparatively slow chips. The high speed H- and G-series are not 10nm and will not have 10nm devices until at least 2021 but they will get a 14nm 10-core version of Comet Lake. It is unlikely that 10nm will ever outperform 14nm on anything but energy use and 7nm will be here before there are enough suffixes to 10nm to get it over the hump. Assuming 14nm development stops cold which it won’t.

So what did we learn from this roadmap Tweakers got a hold of? A bunch of new code names are confirmed like Comet Lake, Rocket Lake, Skyhawk Lake, and Elkhart Lake being the obvious highlights. Rocket Lake is the most interesting one because it uses two die of mixed process nodes, 14nm CPU and 10nm GPU just like the Intel/AMD Kaby-G. This part also confirms nicely where Intel is struggling with 10nm, high clocks don’t seem very viable on 10nm do they?

In the end it all comes down to dollars and that is where things get interesting. Lets take a look at why we say 10nm will never be economically viable.