Performance per dollar divided by dollars is….?

Intel just put out an interesting number at IFA that telegraphs a huge price cut for enthusiast parts. If SemiAccurate’s sums are correct we are looking at an ~50% price drop for Cascade Lake-X parts.

The slide in question is interesting in and of itself, having been thoroughly roasted in the press for a 180 degree shift in tone towards, “Real World Performance”, something Intel fastidiously avoided up until this point. It also backs up the point SemiAccurate was making at the i9-9980XE launch, AMD’s Threadripper 2 beat it like a drum. For less money. Lets look at the slide in question and then pick it apart. 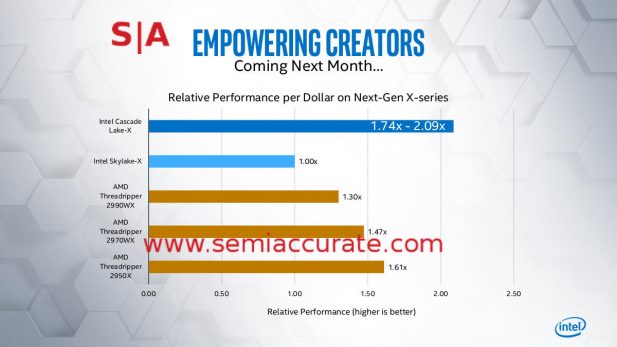 Looks good until you think about it

The first thing you notice is something very un-Intel, comparing performance per dollar, not performance. This is your first clue about how badly they lose. The second thing is that Intel is directly admitting that the i9-9980XE loses in raw performance to AMD’s cheaper Threadripper 2’s and loses by a much larger margin when price/performance is taken into account. Best case Intel loses by 30% in performance per dollar (PPD), worst case 61% down.

This is with Intel’s own numbers using non-disclosed benchmarks which are undoubtedly very favorable to Intel’s parts. Intel also makes claims for an undisclosed part which may or may not exist, no or ever, but it wins and they want us to parrot that back. This behavior is unacceptable and sadly part of a seeming trend at Intel. Do they even have a legal department checking this stuff? If so, how does such obvious unethical behavior pass muster?

But there is a ray of sunshine, the updated Cascade Lake-X (CLX) parts will double PPD versus the older Skylake-X parts vaulting Intel back into the lead over the upstart Threadripper 2’s. CLX is coming next month so all will be right in the world, right? No points if you are giggling insanely right now but the long form answer is no, it won’t be right, not even close. In fact the upgraded CLX parts are unlikely to beat AMD’s year old Threadripper 2. We will get to the impending Threadripper 3 later, hold tight gentle readers.

Lets break it down a bit

If you take the performance numbers given by Intel, very skewed and favorable toward their parts mind you, AMD’s TR2 2990WX beats it on raw performance and is $200 or 10% cheaper. The numbers above are Model, Price, Cores, percentage of 9980XE price, PPD, and raw performance based on Intel’s numbers. This last one was calculated by multiplying the PPD by the price of the AMD product as a percentage of Intel’s 9980XE (All numbers rounded a bit for sanity). The 2990WX beats the 9980XE outright by 17% or so, the 2970WX loses by 4% but costs <2/3rds of the price, and so on. Basically it isn’t even close in PPD as Intel rightly points out but it is kind of close in raw performance.

So that brings us to the top line, the mighty CLX that runs between 1.74x and 2.09x Skylake-X in PPD. Awesome, right? Remember when SemiAccurate said Intel had no chance in servers and they know it? We said the Cascade Lake line would beat the Skylake line by <10% but for the sake of argument we will use 10% from here on out. Since the upcoming CLX part in the graphs is almost assuredly the same 18 cores as the Sky based 9980XE, we will assume it goes up by about 10% in performance. Another data point is that these are both the highest end parts from the mid-sized server die called HCC, they map directly to the Xeon 6154 and 6254 for Skylake and CLX respectively. Those parts run at 3.0/3.7GHz base/peak turbo and 3.1/4.0 for Sky and CLX again respectively. This is a <10% clock difference and other than the added VNNI instruction set and a lot of bug fixes, the two chips are the same.

So to get that doubling of PPD, Intel can either double the core count, double the clocks, or, wait for it, halve the price. Actually none of those are the case since real world performance went up by ~10%, Intel only has to raise the core count by 90% or so. Same for clocks and price, but you get the idea. In case it needs to be said, Intel can only go up by 10 cores to 28, that is the biggest die they have at the moment which won’t get them close to the PPD claims. It will also crater the clocks so the real world performance won’t go up by even that much.

Similarly clocks are not going to double or even go up by 90% for the same reasons. The best Intel can do at the moment is about 1/3 higher clocks and that is on an 8C model which is binned so tightly that volumes are going to be minuscule. Getting that high would blow out the power budget too, same with 28C at the same clocks. Remember the Computex 2018 5GHz fiasco? In short even with blowing out the power budget, going to 28 cores, and binning so tightly that they might get a CPU a week that meets the criteria, Intel can’t meet that 2x performance goals with silicon changes. About 10% is about all they can do if they want CLX to be an actual product.

So where does that leave us? The only real option is to slash prices by about 90% to get to the promises numbers. Since Intel didn’t actually do the ethical thing and disclose, oh say ANYTHING about the products they were supposed to be comparing, the actual number could be anything. Similarly the benchmarks could be anything from realistic to highly skewed, Intel specific ringers. Based on recent form, SemiAccurate will guess Intel will cook the benchmarks and use it to show a killer win for the upcoming CLX at a price point around $1199 +/- $200.

If you take the $1200 price point and a 10% performance uplift, the high end CLX won’t actually beat last year’s Threadripper 2 2990WX, that part won by 17% according to Intel’s own numbers. Sure the price drop will mean it will be a lopsided win on PPD but for those that care about raw performance, Intel will still lose. Do recall that when the 9980XE launched there was one, as in single, slide with performance and no mention of PPD. Intel cared about raw performance then, see? 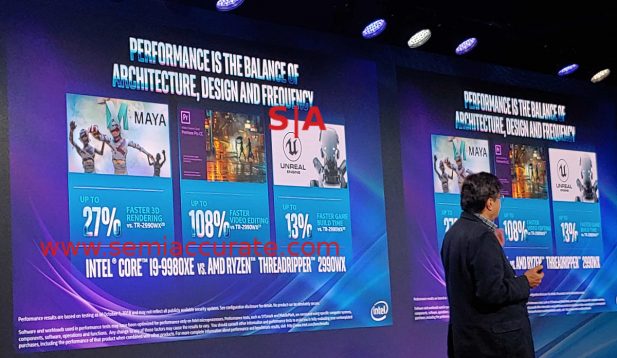 And just for laughs, in the IFA deck Intel directly mocked AMD for doing what Intel itself did at the 9980XE launch. No we are not joking, see? 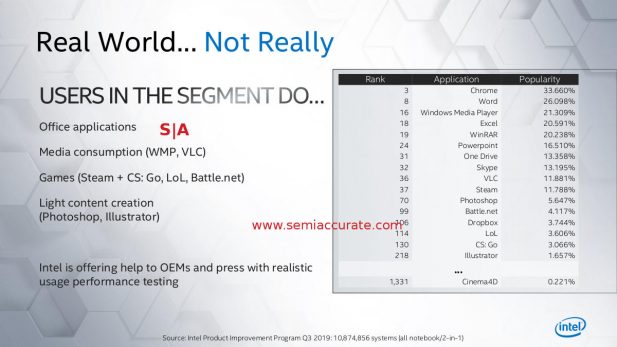 For a gaming part Intel sure liked to show off content creation workloads, and even then those wins were pretty meager, only one win out of three on PPD. If Intel cared about PPD back then it would have been pretty painful to watch that presentation. In any case it’s almost as if Intel found the weak spot for Threadripper 2, basically memory latency, and picked three benchmarks that are heavily gated by exactly that. Imagine if Intel has used fair, representative benchmarks back then, you know the ones that measure, “Real World Performance”? Ouch is the word that seems most appropriate.

Since we are talking about the future, lets talk about AMD, specifically Threadripper 3. According to Gamers Nexus, TR3 will be available in 4 and 8-channel memory configs, the larger of those being a higher clocked Rome. The smaller of the two with four memory channels is analogous to the current TR2 but with the massively updated Rome architecture. In all but a few highly skewed benchmarks, Rome utterly crushes Intel’s Cascade Lake server parts. And does it at a lower price. So low that Intel can’t actually compete on PPD without selling Xeons at a loss. No we aren’t joking, when measuring PPD or TCO as the server world does, Intel simply can not compete with Rome.

Since the 9980XE is just the mid-range Skylake die washed, shaved, overclocked, taught to walk upright, and branded as something shiny, the same is true for the upcoming CLX based XE gaming part. TR3 is Rome with a few things turned off so it will do the same to CLX in the gaming world. It is going to be a slaughter. TR3 also has PCIe4, way more lanes, more features, and can offer nearly 4x the core count. Intel can clock CLX a bit higher but loses badly on everything else, usually by very large margins.

To be fair the updated Cascade Lake-X will be out in October, a few weeks before general availability of Threadripper 3. During that window of a few weeks, Cascade Lake will beat everything but the geriatric TR2 2990WX by a small margin on performance and by almost as much in PPD as the current TR2 beats the current 9980XE. When that window shuts, game over.S|A