Don’t tell me you wouldn’t have made that pun

Today you can finally ‘get’ AMD’s FidelityFX Super Resolution in games and it is a good thing. SemiAccurate told you about the tech a few weeks ago, now it is time to look at a few more details.

We say ‘get’ FidelityFX Super Resolution (FSR) because if you have a GPU that supports it, basically anything modern worth gaming on, you already have the hardware. Enabling FSR is a matter of adding the code to the games themselves, and off you go. The devil, or at least the cool stuff AMD has revealed so far, is in the details so lets look at some of those.

If you have been hiding under a rock since Computex, you might have missed the buzz that surrounds FSR, basically an upscaling and sharpening tech that will allow you to run at a higher rez/frame rate combo than your GPU would allow natively. The catch is that this algorithmic upscaling comes at a slight loss of quality, hopefully visually lossless during heated gameplay but at unquestionably higher framerates. 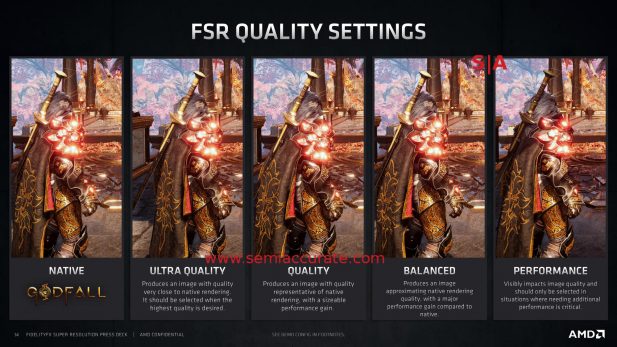 There are several presets for FSR that range from native, off really, to performance as you can see above. The right side biases image quality, the left frame rates, but all are running at a higher frame rate than what is achievable from native renderings. Under the hood, FSR can take an arbitrary number from 1-2 which signifies the scaling factor in each linear dimension, 1-4x in area. Those presets are just points AMD picked out in that range as you can see below. 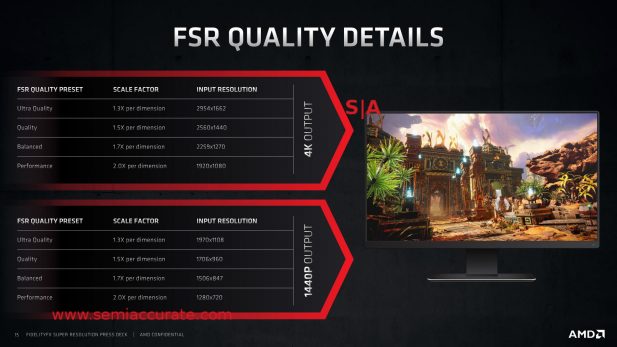 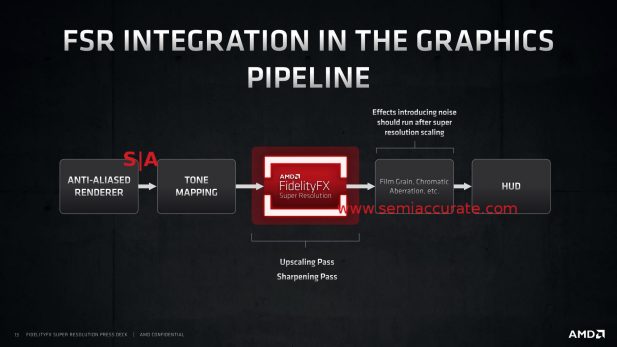 FSR is just two shaders in the rendering pipe

There are two passes to FSR, the upscaling and sharpening passes, both of which are shaders that run entirely on the GPU itself. Since they are just shaders, any GPU that supports modern shader architectures should run FSR, AMD even showed it running on Nvidia hardware that their native and quite proprietary tech does not support. When asked about Intel’s current GPUs, AMD said it should work but they haven’t tested it and quite frankly it wasn’t their problem. Well they didn’t say that specifically but the message was quite clear. In any case if your GPU can spare the resources to run the two shader passes, it should work. 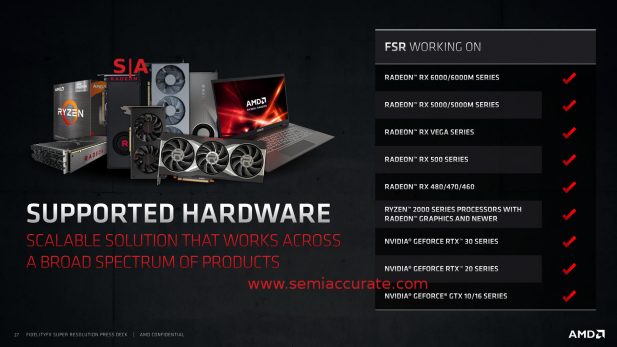 If your GPU is very old and weak, FSR will likely still work but there is little point to it. The higher the starting rez the better the results and AMD more or less said that below 1080p it isn’t worth doing. If you need the technical reasons why, go take a few courses in information theory and you will get a clearer picture than the results of running FSR at low resolutions. In short there is can and should, AMD is talking about should but not blocking the can should you not take their advice.

So lets say you want to implement FSR in your games, what do you do? In mid-July you can go to AMD’s GPUOpen site and grab the code. Unlike Nvidia’s tech, it is open, free, compatible, and effective, all this without handcuffs and backroom threats. Who knew that could be done? Seriously though, if you implement FSR in your game, AMD says it should be cross platform and cross hardware once coded, as we keep saying it is just a shader. The claim is that there will be little if any rework moving to a different device and if this claim holds, FSR could be the holy grail for upscaling technology. As of today there are seven games released with FSR support with 12 more listed as coming soon. The partner page lists a few dozen partners so support is about as widespread as you can ask for. No down sides to this one really.S|A