Analyst Day 2022: They are catching up to SemiAccurate fast!

Intel’s 2022 Analyst Day included a big new server roadmap update which almost catches them up to SemiAccurate. That said there were a few interesting tidbits to tell you about among the vagaries. 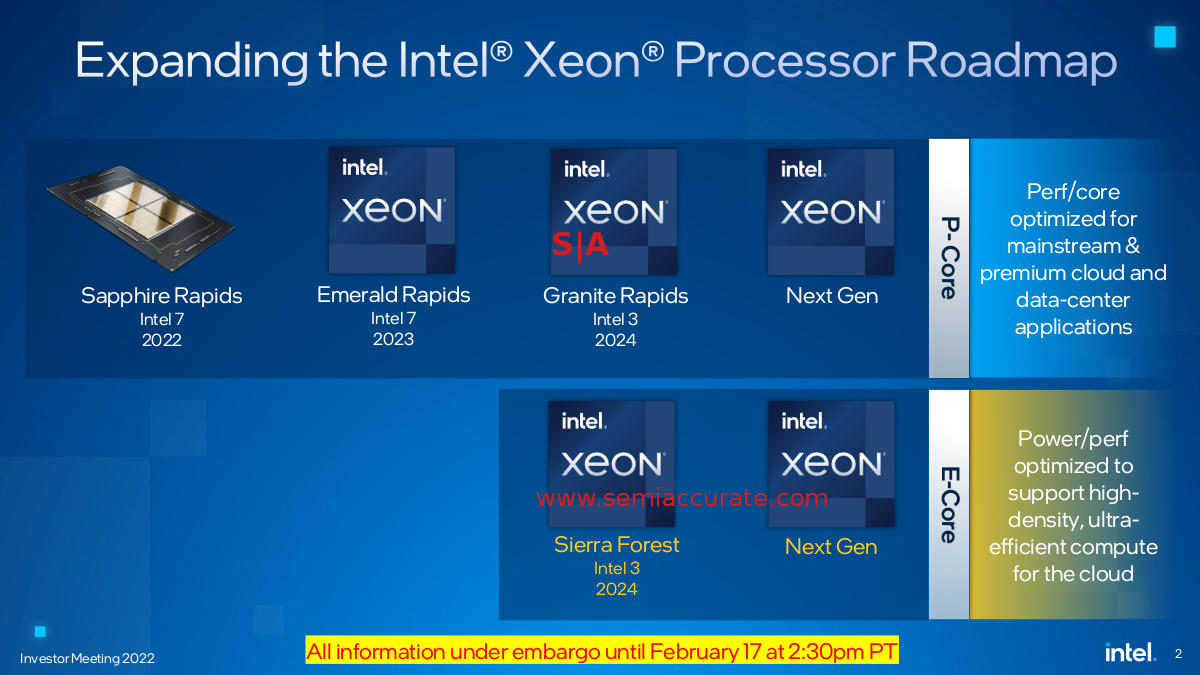 Intel – We can help with the missing bits!

As you can see the official roadmaps are a little less precise than SemiAccurate’s and a lot less detailed. That said Intel talking about their future plans are a good thing. Lets go over the new stuff starting with Emerald Rapids which SemiAccurate first mentioned in 2016. Back then we called it Emerald Lake which was one of two ‘Kaby’ type backup plans for Sapphire Rapids in case of further slips. Spoiler alert, things slipped but not badly enough for Plan C, Ruby Lake/Rapids to be pulled off the shelf.

Instead of that we have Granite Rapids which we thought we had mentioned long before the mid-2019 date we first found. In any case if we were to use semiconductor manufacturer release dates, we could make a credible claim that we first said Granite Rapids in 2013. Yes that is a joke. What isn’t a joke is that Intel is moving Granite Rapids from a 7nm to a 7+nm process node, 4 to 3 in the new marketing disinformation nomenclature.

That said it still appears that the CPU will use the split die core/IO setup that the 7nm process required. This is a big change almost assuredly brought on by the delays to Sapphire which the new Intel wisely took advantage of. Don’t underestimate the magnitude of this, the old Intel would have been unlikely to take the opportunity and could not technically make the change in time if management somehow did the right thing. Go back and read this article, we weren’t joking about the magnitude of the change, it really did save the company.

That brings us to Diamond Rapids, or “Next Gen” as Intel calls it. SemiAccurate exclusively brought you this name in 2019, Diamond not Next Gen, and since then the roadmaps have slipped a little. Diamond was going to debut in late 2023 back then, now it is 2025 or so. Any specs we could tell you about have almost assuredly changed so we won’t say much until this part firms up a bit more. For example Granite now has the same core count as Diamond was supposed to in 2019…

Moving on to the little cores we have Sierra Forest which we told you about in 2020. It is the first of the Intel ‘little’ core server CPUs, basically their version of AMD’s Bergamo. Same idea, same rough execution, but the core is called Sierra Glen not Z4D. a lot has changed on SRF since we first told you about it starting with it moving back to Intel’s one 7+nm process. Sadly Intel would not comment on the most burning question regarding this line of CPUs, will the PiBs come with an LED fan or just a boring old non-lit one? Our guess is we will have to wait for ‘Next Gen’ (Note: Don’t let Intel know we said Clearwater Forest, they still think we don’t know) before we see true LED fans in this lineup.

Overall this roadmap update is a good thing but a bit behind SemiAccurate’s. We have faith they will catch up soon and would be glad to help them fill in the blanks on their maps. In any case Granite and SRF moving processes is a strong hint that Intel’s 7+ is on track and the flexibility linked above is working. Intel of old could not have pulled this off in the needed time frames, what you are seeing is the first green shoots of hope planted by the new order.S|A