Today AMD finally releases their Milan/Zen 3 based Threadripper Pro 5000 line of workstation CPUs. While SemiAccurate is glad these woefully late CPUs are finally out, there really isn’t much to talk about.

Lets start out with the timing starting with the release of Threadripper 3000, non-Pro, in November 2019. That 4-channel memory part was followed by the 8-channel Threadripper Pro 3000 in July 2020. Whether you blame Covid, supply chain, or just a general lack of AMD giving a sh*t about the market, the 3000 Pro was woefully late. This was followed by AMD’s Milan server CPU in March of 2021, almost exactly a year ago. Doesn’t that three month delay between Rome and the TR3 line based on it look quaint now? At least the Milan sourced TR5 is now here, see? 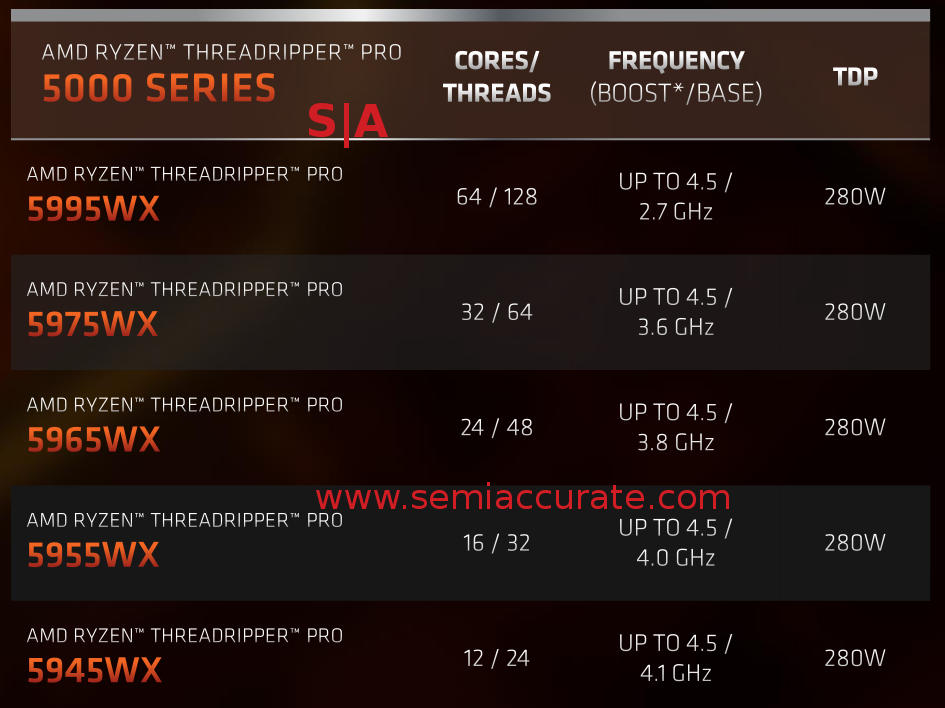 Some of the expected data

We would love to tell you more about the CPUs but we missed the official brief and asked questions too late to get an answer in time for this article. Call it being to busy (True), not giving a damn about anything AMD officially says at this point (Also true), or just having a very educated premonition that TR5 was pretty ‘meh’ (Again also true). The fact that the briefing materials were long and mostly information free didn’t help, as you can see AMD didn’t bother to put in pricing or cache size much less technical stuff like ECC support. The borderline useless briefings continue unabated, drip feeds and quantity seem to have utterly replaced quality at AMD.

That said there was one thing that stuck out on the TR5 briefing, software support. AMD claims TR5 will have great software support, something which their track record unquestionably disproves. Although the performance figures show TR5 destroying Ice Lake based Xeons and workstation chips, Intel has reliable software support for the lifetime of the CPU, AMD pulls the rug out from under buyers as soon as eyes are off. In the real workstation market, this matters and matters a lot. Keep that in mind before you buy, don’t get bitten like the author did. Multiple times.

So AMD has come out with the new Milan based Threadripper Pro 5000 line of CPUs, painfully late and the briefing lacked almost all relevant data, but silicon was released. If we cared about the official word we would probably have asked about it before the last minute but to be perfectly honest, we don’t. If you want raw performance for your workstation, buy Threadrippers. If you want support, buy Intel, but don’t expect them to challenge the 5000 line until late 2024, by then there is an outside chance there might be a Genoa/Zen 4 based Threadripper out.S|A

Update: Literally minutes before we posted this, AMD answered some of our questions, good on them for burning the midnight oil. That said it brings up a few interesting points. First is that AMD refused to price the parts, referring to Lenovo who is setting the pricing for their workstations containing the CPUs. We didn’t ask about workstation pricing, we asked about CPU pricing which AMD sets and for some idiotic reason refuses to talk about. Really guys?

On the ECC front all of the TR5 parts support ECC but AMD is castrating them to half the memory ceiling of the Epyc line. This is dumb but not Intel Xeon dumb, basically a trend we hope does not continue.

Last up is the cache size which AMD still takes the slimy route and adds up all the L2 and L3 on a device to report a bigger number. End this stupid scheme AMD, you aren’t fooling anyone with it and it only pisses off those who care about such things.

That said AMD seems to have left the cache sizes off the presentation for are reason, they are taking the cheap route for TR5. The 64C 5995WX obviously has the full complement of cache because it has the full complement of 8 CCDs. None of the other parts do. The 32C 5975WX and the 24C 5965WX both have 128MB of L3 which means they have only four CCDs. The 16C 5955WX and the 12C 5945WX only have 64MB of L3 so a measly two CCDs. Given the price of these CPUs, even if AMD is pretending there isn’t one, this is self-destructive.

AMD cheaped out here, given the workloads involved you are much better off buying a Milan 7543P with 32C and 256MB of L3 then OCing it a little. In fact any of the equivalent 1P Milans seem to be a much better deal than the TR5 line in light of these rather perplexing choices, we just don’t get it. The Milans may be slower on paper but that is a choice, simple binning could net you a much more efficient TR5 than what AMD is offering. Better yet buying a Milan would get you the part a year earlier and allow you to choose from multiple boards and systems. What little enthusiasm SemiAccurate had for Threadripper Pro 5000 just evaporated.