AMD’s Ryzen 5800X3D is too flawed for consumer use

What works in server doesn’t for consumer

Today AMD releases their long awaited consumer 3D V-Cache CPU called the Ryzen 5800X3D and it is not as good as expected. This isn’t to say it is a bad part, just that the glass jaws and caveats overwhelm what SemiAccurate was hoping it would be.

Lets start out by saying that the 5800X3D is just a consumer version of the Milan-X server CPUs we told you about weeks ago. Those are good parts, or at least good parts if you need them. They are also expensive parts. The 5800X3D is neither because it starts out at the same $449 price point as the older 5800X without the -3D. 64MB more L3, same TDP, what’s not to love? Quite a lot as it turns out, a significantly more expensive device to manufacture selling at the same price as a cheaper one to make is a big hint. 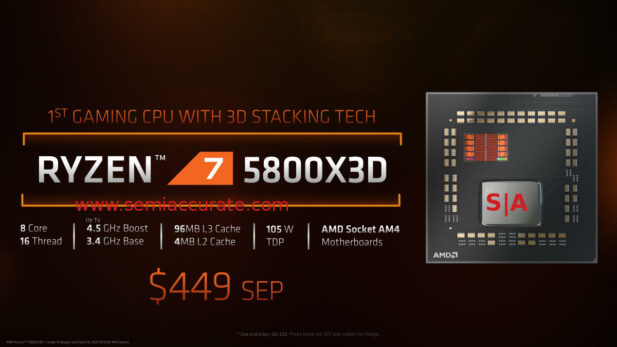 The specs in slide form

Lets start out with clocks or lack thereof. The 5800X runs at 3.8/4.7GHz but the 5800X3D only hits 3.4/4.5GHz, lets call it single digit percentages down. That isn’t the end of the world but as Intel shows, many games thrive on clocks. AMD claims 15% faster gaming performance over the 5900X but don’t believe their numbers, SemiAccurate considers AMD to be a dishonest company when it comes to messaging so wait for third party numbers to come out. That said be careful with those too, given AMD’s slimy behaviors in influencing the press, your mileage may vary. Sorry, no more on this until another embargo expires, just assume everything they say is at least lying through omission and you won’t be far off. 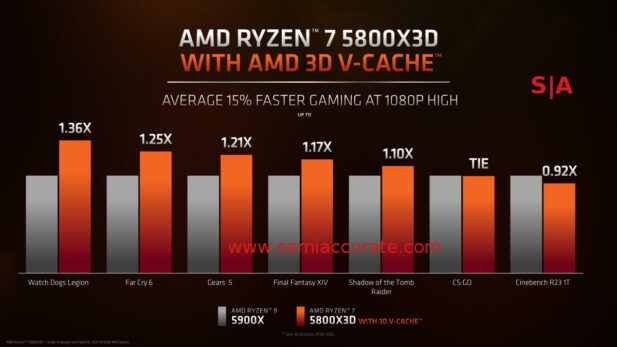 The last column matters most

Back to the story, why is the 5800X3D ‘worse’? Two major reasons, latency and overclocking. On the latency front the L3 cache on the -3D is about 4 cycles slower than the non-3D parts, something AMD went to very tortured lengths to try and minimize in the briefings. As you can see in the slide above, Cinebench regresses because of this and the clock drop. AMD spins this as, “the -3D is a gaming chip” which is a better message than one about the chip regressing on large swathes of productivity and content creation workloads. If you do anything but purely game, buy the non-3D parts, if you game a lot, buy the Intel parts and disable the marketing cores. In short as a consumer part, the performance uplift from the cache is more than outweighed by the regression in many other areas.

That may be sub-optimal but the real problem is in overclocking, AMD completely locked it out from the 5800X3D. Yup, their gaming flagship is clock locked, how stupid can you get. OK, Intel’s user abusive overclocking extortion is worse but at least it can be ‘solved’ if you want to pay up. AMD’s 5800X3D is locked, the end, and there is no way around it. Why is AMD this stupid? Because the device is too fragile and anything going over the baseline specs would probably result in sub-optimal product lifetimes. And some acrid smoke.

The problem is in the construction. If you go back to the Milan-X article linked above, you will see that AMD puts the cache die over the non-core areas of the base die. Why? Heat. The base die is thinned out and the total package including the spacers over the core areas are no thicker than the original non-3D parts so what is the problem? AMD won’t say for sure but the place where SemiAccurate would start to look is the transitions between the dies as a thermal barrier. Then start thinking about how flat is flat for the bonding surfaces on the spacers and what imperfections there mean for energy transmission.

All that said the bonds between the two die are not as robust as you might expect, they are placed next to each other and held together by Van Der Waals forces, then the copper pillars are annealed to actually fix the dies together. This is nowhere near as strong as conventional bumps and underfill/epoxies, and those spacers don’t have copper pillars to anneal. If you stress them by, oh say overclocking, it is much more likely to result in catastrophic failure than one would expect. In short AMD knows that these parts are fragile, not unsuitable for task mind you, just more fragile than high end enthusiast users expect from a gaming CPU. AMD runs them well within tolerances but by locking out overclocking, they are directly saying the headroom beyond stock is basically non-existent. Overclocking went out the door for a good reason. During the briefings, AMD did try to intone that memory is unlocked and this is essentially just as good. That just shows you how badly they are twisting the messaging on a fundamentally flawed part.

If you are thinking that releasing an enthusiast oriented gaming part that can’t be overclocked is rank idiocy, well you are right. The Ryzen 5800X3D is fundamentally flawed and while it can put up some decent numbers in some areas, in SemiAccurate’s eyes the flaws overwhelm the upsides. So why put it out? Marketing. AMD is losing the gaming market to Intel, or at least losing the messaging and mindshare wars, so they have to leap into action.

Since they can’t do that with a woefully long in tooth consumer product line, they spin. Take a good server part and chop it up into a consumer part and hope no one notices the crippling flaws. We noticed. So long story short, Intel is coming up fast in consumer, AMD has no new parts to respond with, so spin it is. The 3D V-Cache is a really good idea for number of server markets but the flaws mean it has no real market on the consumer side. Sure it can put up a few good numbers but the 5800X3D is so ill-suited for the task at had it makes us question why AMD bothered. Oh yeah marketing. This is how it started at Intel if you recall.S|A