Today Qualcomm is releasing three new Snapdragon SoCs, the 460, 662, and 720G. These three fill out the mid-range of the lineup, but SemiAccurate thinks there is a lot of interesting details hidden in these products. 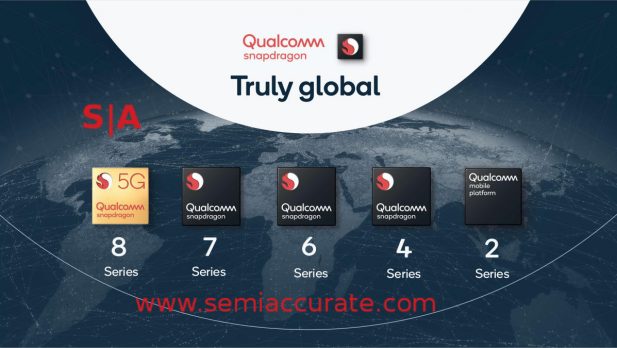 One of these is not an even number

As you can see from the picture above, there are now five distinct series of Qualcomm mobile phone SoCs, more if you add in the 8CX and company laptop oriented parts. We all know what the 800 series is, and had a good idea about the 6 series too. Then they added more and more, coming out with the 700 series recently with line delineations that are clear as mud. That said with the release of these new parts, some of that delineation is actually clearer. 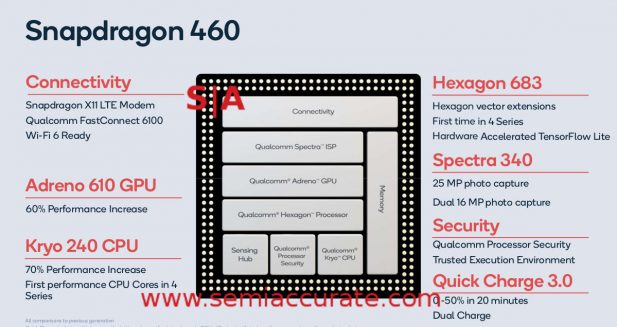 Lets start out with the lowest end of the line, the Snapdragon 460, the successor to the current 450. It is obviously the least expensive of the parts released today but it still comes with an X11 modem aka 390/150Mbps down/upstream, not bad for a ‘value’ part. Carriers will love this one because the more they can push higher Cat LTE devices to the masses, the more efficient their networks become and, well, profit.

The 460 supports Wi-Fi6 which means optional external chip if you want it, but interestingly there is no Bluetooth listed, an curious choice. On the serious plus side the 460 brings the Hexagon DSP to the 400 series for the first time. The description makes us think it is the older generation of parts lacking the new tensor engines but that should still be a serious step up for this class of device both in performance and energy use.

Things get interesting when you look at the cores however, there are eight in the 460, 4x A73s at 1.6GHz and 4x A53s at 1.8GHz. This won’t set the world on fire but they are solid enough performance to be a worthwhile upgrade in this class of SoC. The most interesting part though isn’t the cores, it is where they are made, in this case Samsung and Global Foundries on an ’11nm’ process. SemiAccurate thinks this is actually Samsung 11nm and GF12 but we could be off there. More on this in a bit. 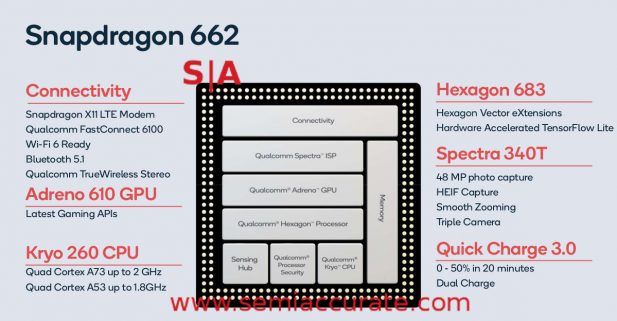 The Snapdragon 662 is a minor step up in the core department and radios too. The core configuration is the same as the 460 but it runs the big cores at 2GHz while the small stay at 1.8Ghz, and it comes from the same fabs on the same process. The LTE radio is also the same X11 part as the 460 as well. So far so minor a step up, right?

That brings us to everything else which is where the 662 steps out. Bluetooth 5.1 along with wireless stereo support is there for starters. On the camera side there is support for one more, three in total, with up to 48MP capture rates. The inclusion of HEIF support likely means the imaging support is on the same level as the Snapdragon 855 but until Qualcomm actually discloses the details of the block we can’t be sure. The GPU is a similar can of worms, lots of claims, no disclosures so just ignore it. In short the 662 is a little faster but a lot more capable where users need it. 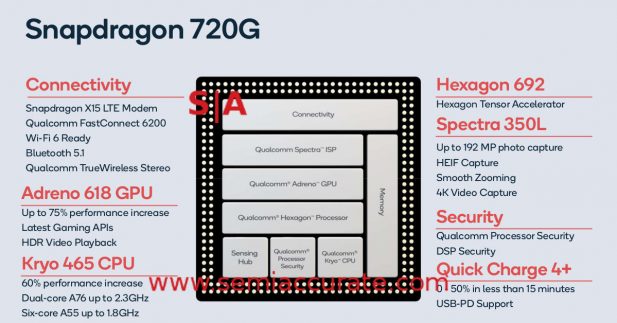 The last of today’s trio is the 720G which is a very different beast starting with 2x A76 cores at 2.3GHz backed by 6x A55s at 1.8GHz, all made at Samsung on an 8nm process. On the modem front we have an X15 modem with 3x CA and a peak download speed of 800Mbps, the upstream speed is unlisted but likely the same Cat13 150Mbps block found in the 460 and 662. Bluetooth and the rest of the local connectivity options remains the same.

On the DSP front the 720G seems to have the current high end Hexagon with the latest tensor accelerators found in the 800 series parts, a good thing for all involved. The Spectra 350L also supports the latest round of goodies so it too is likely a cousin to the 800 line’s unit while the Adreno 618 GPU is, well, anyone’s guess once again. It does claim to support HDR though.

Update January 31 @ 4:30pm: Qualcomm points out that the Snapdragon 720G does not have a separate SPU, it has the same pre-SPU security features as the rest of the Qualcomm SoC line.

One addition SemiAccurate wasn’t expecting is the Security Processor on the 720G. While we think this is a good thing, we just assumed it was in the entire line, not just the high end parts. The inclusion of such a small block in the 720G and not the 662 tells us that it is not an economic choice, the entire platform needs to support it at a very granular level. Until all those blocks trickle down to the lower tiers, you won’t see the latest security features there. This could have serious implications on the uptake of the platform in Asia if competitors offer features in lower cost models first. That said given how hard security is to do right, this is a bit unlikely but don’t ignore the risk.

So that is the three new platforms, the Snapdragon 460, 662, and 720G. You would be forgiven when you read the above and don’t see how the platforms are any more clearly delineated than before you read the above. The answer is in the cost, and that starts with manufacturing and die sizes. If you aren’t familiar with the technical definition of modern <20nm nodes and what they mean, read this for clarity.

Now that you get what the numbers mean, lets look at what Qualcomm is doing. The high end 800 line is made on TSMC’s 7nm process, currently the gold standard of foundry processes. It is expensive and wafer allocation is pretty tight. While making this new trio on TSMC 7nm would unquestionably result in a better product, it would also result in a significantly more expensive product.

Instead Qualcomm went with Samsung 8nm for the 720G. While this sounds like a near relative to the 7nm nodes, it isn’t, not even close. SS8 is a variant of the maligned for good reason 10nm node, basically new transistors on 10nm with precious little area shrink. This results in a slightly more power hungry, larger SoC than a TSMC7 variant but it ends up being significantly cheaper per transistor.

The Snapdragon 720G is a victim of marketing in more ways than the process name, note the 2/6 big/little core config. Due to rank idiocy among consumers it seems impossible to sell a phone with less than eight cores. The days of the Snapdragon 810/808 are long gone so you have to add two cores to not get destroyed on store shelves hence the two added A55s in the 820. This saves significant die area compared to the 4/4 config dropping cost.

On the GPU side the 720G name intones a big GPU aimed at gamers but, well, Qualcomm’s lack of transparency on anything GPU means we can’t tell you anything useful other than quite possibly bigger and more expensive to make than a 720 sans G. The rest of the features from the 800 line are pulled down to the 720G meaning the net result is a big chip but not as big as the 765G and much cheaper than anything made on TSMC7. Wafer starts on the ‘8nm’ process should be more plentiful too.

Stepping down to the 460 and 662 we move to the Samsung 11nm process which as it’s name suggests is closer to the 10nm process than the 14nm node. Unfortunately this suggestion is intentionally misleading on Samsung’s part, the ’11nm’ process is a minor variant of the 14nm node like Global Foundry’s 12nm/14nm twins. In any case the node these devices are made on is again a lot less dense, a little less efficient, and a whole lot cheaper than the ‘8nm’ node of the 720G. Both foundries should be awash in capacity here, a good thing given the volume vs price curves on phones. Splitting the orders between two foundries should give you a hint about volumes at this end of the market.

The cost savings on the 460 and 662 are pretty obvious starting with the older generation CPU cores. This isn’t to say they are bad, the A73/A53 lineup brings a serious boost to the low end, especially on the 460. Given how much of the rest of the SoC is similar between the 662 and 460, basically the ISP is the differentiator, it sure looks like they are the same physical die. This isn’t a bad thing mind you, it just means the 460 gets a serious capability boost courtesy of semiconductor economics.

So in the end there are three new Qualcomm SoCs released today, the Snapdragon 720G, 662, and 460. If you look at the features and branding, it makes little sense to have so many disparate lines in such a tight space. When you look a bit deeper at the cost and process side of things, the different lines become much clearer. 700 seems to be about packing as much of the 800 series tech onto an older node as possible, the 600 and 400s are about doing the same one node back and binning a bit more. If you think of it more as when you can make a feature at a given price based on semiconductor economics rather than headlines, this segmentation becomes a lot more understandable.S|A