AMD had their Financial Analyst Day yesterday and SemiAccurate found a lot of goodies. More importantly the things the company telegraphed show a very disciplined focus on execution.

We will skip the financial bits of Financial Analyst Day because, well, we are a tech site. We will also gloss over a few of the seeming headline points because they were both obvious and expected, plus we told you about most of them months if not years ago. Genoa and Navi 2x are good examples of this. 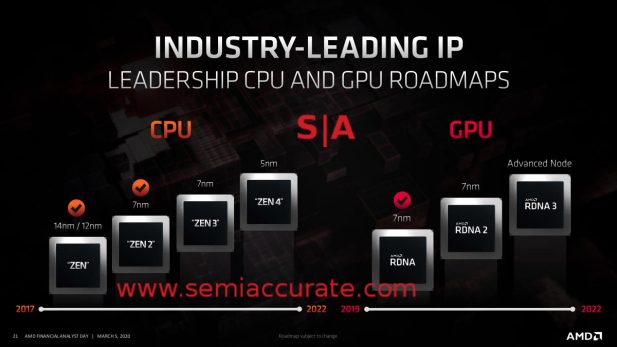 Looks good from this height

The first thing on this slide is the two 7nm nodes which caused a lot of confusion. The short version is that Milan/Zen3 and Navi 2x/RDNA2 were supposed to be on the EUV based TSMC 7+ process but are now listed as “7nm”. The chips are still being made on the same process as before, TSMC 7+/EUV but TSMC has changed the naming to “7nm” for some unknown reason. Gotta love marketing. The following generation for both the Zen4 cored devices like Genoa and RDNA/CDNA 3X are made on a 5nm process but that has been known for a long time now. It is official now though so… yay?

Lets start out with packaging, a place where AMD has been leading. They were the second company to commercialize interposers and 3D stacking in any sort of volume after Xilinx. Lets just say AMD was the first to bring 3D stacking and interposers to the consumer market with HBM on the Fiji GPU about five years ago. Now they are doing things in a much more advanced way, pun intended.

Lots of companies talk about advanced packaging, Intel being the notable one of late. Good luck trying to buy an Intel device with advanced packaging though, they don’t exist in the market yet. They will this year but not in any sort of volume for reasons we won’t get in to now. That said you can buy lots of AMD products with interposers, multi-die MCMs, chiplets, and soon with what the company calls X3D packaging. 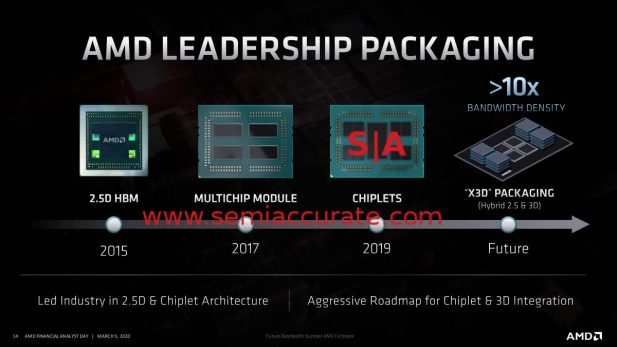 Packaging is a differentiator

What is X3D? It is a hybrid of 2.5D packaging, aka interposers/MCMs, and 3D chip stacking, aka HBM/vias. When will it happen? SemiAccurate’s best info says that it will be in Milan, just like we told you last April. Be honest, I’ll bet you thought we were joking back then, right? In any case it sounds like the X3D version will only be in some variants of Milan but will be much more prominent in Genoa. Within the next 24 months or so, AMD will probably have the majority of their server products, both CPU and GPU, available with at least an X3D option. 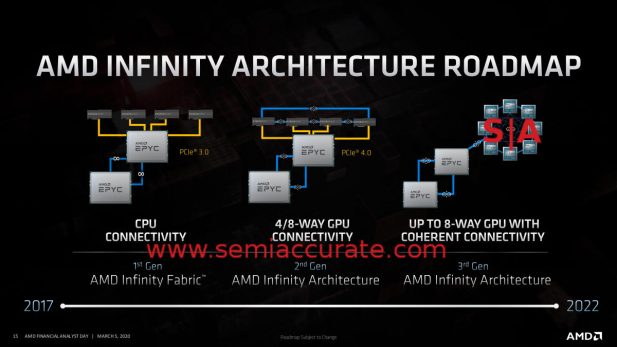 This is key to large systems

Things get interesting when you start talking about advanced topologies, something no one else on the market really has. Intel showed off a few tantalizing bits with their Ponte Vecchio preview last November but from the look of it, their architecture pales in comparison to what AMD is offering. If slides are to be believed, a two hop diameter 6-chip solution should lose to a fully connected 8-chip solution. Neither side has silicon at the moment so it is a bit theoretical, but if you look at who is spending money on which solution, the winning tech is pretty clear.

One thing to think about is the solutions that AMD presented are based on platforms, not CPUs as many have ‘speculated’. Naples was Gen 1 with PCIe3, Rome/Milan are Gen 2 with PCIe4, and Genoa is Gen 3 with PCIe5. This means the fully connected topologies could easily be accomplished with 32 lanes of PCIe5, 4x per connection, giving each GPU the same bandwidth as today’s 16x devices to any given point on the ring.

More important to this, critical actually, is the underlying Infinity Fabric/Architecture/Somethingnewnextweekprobably. It comes with two new terms for AMD, CNDA and system coherency. CDNA is the new datacenter GPU architecture, a forking of the underlying microarchitecture into two different product lines. To be fair, Nvidia did it first as SemiAccurate told you about seven years ago yesterday, and Intel announced it earlier as well with DG1, Arctic Sound, and Ponte Vecchio. In short the idea is everywhere. 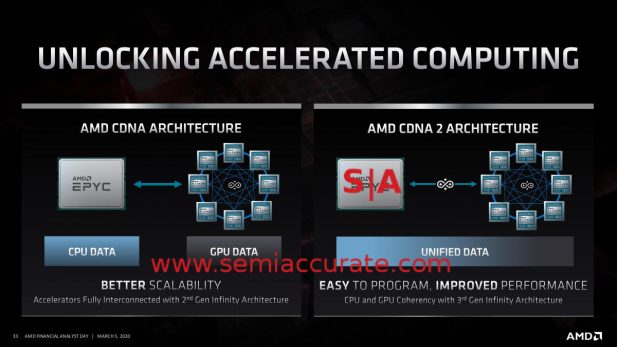 More important than you realize

What CDNA brings to the table, as opposed to RDNA for the consumer side, is a focus on the key points that each market needs while dumping the rest. This minimizes wasted die area, power, and validation but keeps the APIs relatively similar. CDNA is coherent between GPU and CPU so there will be a massive savings in overhead and programmer pain. This coherency is long overdue and will bring sanity to the field of GPU acceleration.

It is very likely that the tight coupling of CDNA and Zen is the reason that AMD won the most recent round of supercomputing contracts over Intel, IBM, and Nvidia. All the others claim to have the same abilities to one degree or other but only AMD seems to have presented a case strong enough for them to win real contracts. With Intel’s supercomputing efforts going down in a flaming mess over Aurora, (Hint: Don’t believe the PR on this one, it is in shatteringly bad shape) and IBM/Nvidia being two separate entities, one of which is known for not playing well with others, there is little hope anyone can catch up in the next 3 years or so. In the supercomputing, HPC, and AI worlds, this is the killer combo for AMD.

Then we come to the last but most interesting bits, raytracing and variable rate shading which are finally found in AMD’s RDNA2 architecture due this year. Nvidia has been making a huge stink about this, claiming superiority, being first to market and the like. Imagination beat them to market by years and the software support for Nvidia’s raytracing efforts has largely been relegated to those willing to accept large amounts of MDF, it hasn’t managed to stand on it’s own much less flourish without large cash infusions. Intel released variable rate shading last year with Ice lake, something also found in RDNA2. This one does have legs, is useful, and will stand on it’s own. 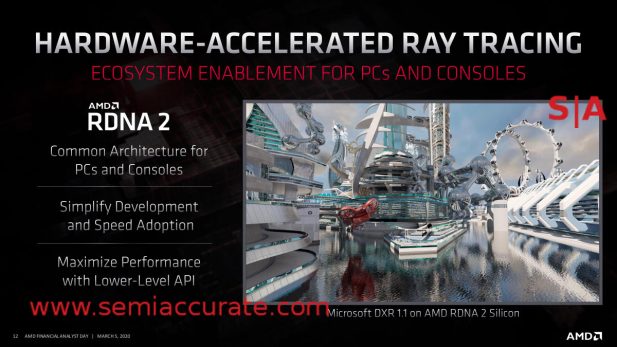 AMD showed off their raytracing capabilities at Siggraph 2019 and supposedly had a video of it running on Navi 2X at FAD2020 yesterday. There are two reasons why this is significant, Microsoft and Sony. The demo was done with DXR1.1 which is said to be co-developed with Microsoft and AMD. Since DXR and Navi 2X/RDNA2 are in the XBox next, any guesses which hardware will be targeted by, oh, say, all of the game developers out there?

If you have any doubts, Sony also uses RDNA2/Navi 2X in the PS5 but with a slightly different software stack. Nvidia uses their own proprietary API that has all the lock-in that developers and customers hate, plus it isn’t compatible with either console. In short Nvidia released first in the vain hopes of a first mover advantage but it was folly. Game over, AMD wins for raytracing. When the software for the next gen consoles starts hitting the market, one solution will be there, the other will be a cash sink.

So in the end what do we have? Ignore the individual data points and look at the overarching messages and you will see the picture. AMD has claimed that they will deliver updates that matter on schedule for years. They laid out their long term roadmaps and have so far delivered. SemiAccurate has a more detailed view of the future than most and from out vantage point, AMD will deliver on the next two generations as well. They prioritized internal processes that would lead to consistent product updates and delivery and have executed on them. The points above are just the ‘what’, ‘why’ and ‘how’ are the things that matter and AMD has delivered on all three.S|A